Decision nears on Okinawa’s request for state of emergency 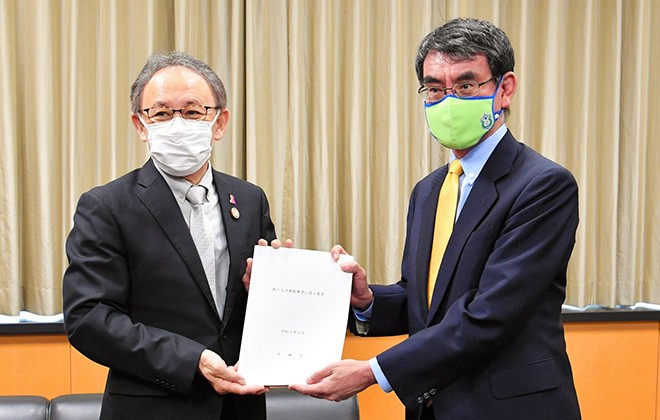 The government will make a swift decision on whether to place Okinawa Prefecture under the COVID-19 state of emergency following spikes in new infections there, Chief Cabinet Secretary Katsunobu Kato said May 20.

An official decision on the matter is expected as early as this week.

Nine prefectures are already under the state of emergency, which is scheduled to end on May 31.

Given the surging numbers of new COVID-19 cases in Okinawa Prefecture, the government could keep an emergency declaration in place there until June 13, sources said.

Japan’s southernmost prefecture reported 198 new cases and the death of a COVID-19 patient in her 80s on May 20, a day after the tally hit 203, the second straight daily high.

Okinawa Prefecture on May 19 asked the central government to declare a state of emergency for the prefecture, fearing the local health care system would be overwhelmed.

Infections began surging in the prefecture after the end of the Golden Week holidays in early May.

Pre-emergency measures have been in effect in the prefecture since April 12. The prefectural government is requesting bars and restaurants to close by 8 p.m., but it has yet to ask businesses to refrain from serving alcohol.

Whether the Okinawa governor should make the request concerning alcohol has been a focal point of discussions between the prefectural and central governments over whether to add Okinawa to the list of prefectures under the state of emergency.