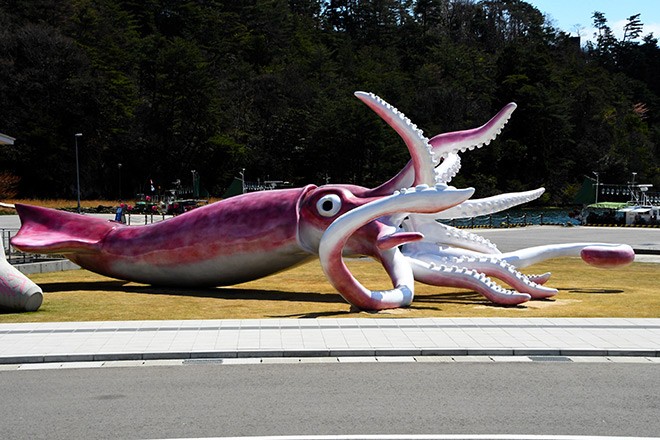 NOTO, Ishikawa Prefecture--A giant squid statue here funded by a central government subsidy to deal with the COVID-19 pandemic is no longer being derided as a colossal waste of taxpayers' money by all.

Instead, to people like squid lover Nameko Shinsan, who sometimes eats the popular seafood three times a day, the statue "looks as if it is swimming right there and has a life force."

The squid’s mouth is a hole where visitors can poke their head through.

“For squid lovers, sticking your head out of the mouth is like a dream come true,” Shinsan said.

The squid is a super life-like statue, 13 meters in length and four meters in height. It weighs about five tons.

The squid has goggling eyes and its legs stretch out long and far as if it is dancing and moving.

The statue, made of fiber-reinforced plastic, was installed on the side of a prefectural road that runs along Tsukumo Bay, a popular spot for sightseeing and pleasure boats, in late March.

It is in the town of Noto, located near the tip of the Noto Peninsula, more than two hours by car from the prefectural capital, Kanazawa.

The town’s Ogi Port is a leading port for the catch of surumeika, a type of squid. Town officials said the statue’s concept is dog-eat-dog, or "squid-eat-squid."

The town last year came up with a plan to build the statue near a facility that has a shop, restaurant, tourist information center and exhibition corner featuring the squid, hoping to boost its post-pandemic tourism economy.

According to town officials, 25 million yen ($229,400), or 90 percent of the construction costs, were paid for with COVID-19 relief funds from the central government.

The town shouldered the rest of the costs, about 2 million yen.

There have been reports around the country that local governments spent the funds, called a local recreation emergency grant, on offbeat items such as “a bell to eliminate discrimination against COVID-19” and “illumination in front of a train station.”

As soon as the Noto town officials announced its plan to install a giant squid with the COVID-19 money, they were swept up in a flood of criticism from far and wide.

Foreign news media, including the BBC and The New York Times, reported on the controversy.

A town official said in frustration, “News media reported it as if we spent all of the COVID-19 relief funds on the squid.”

However, the squid has been a sleeper hit with many locals and visitors.

On a weekday in April, families and couples surrounded the statue to take a picture with it.

A man in his 40s, who lives in Kanazawa and works in the construction industry, said he came to the town for work. When he was driving along the prefectural road, he was so surprised to see the giant squid that he had to pull over to take a look.

“The complexion looks very authentic. It has a strong impact,” he said.

The town government called for a nickname for the squid and received 909 suggestions, officials said.

Town officials see no problem with spending the relief money on the statue.

The central government listed examples for the use of the fund, which include projects that “polish up local attractions” and “promote local specialties.”

The town officials said the statue falls under these two categories.

Much of the money was spent on a project to provide a terminal device to every student attending the town’s elementary and junior high schools for online classes, as well as for issuing shopping vouchers to boost the local economy.

NOT ALL ON BOARD WITH EXPENDITURE

Hideki Noboru, a professor on local autonomy at Meijo University, said the spending on the squid was not an appropriate use of the funds.

“I think it is fraud committed against the people,” Noboru said.

A man in his 60s who lives in Noto said the squid “may bring in tourists, but the money should have been spent on support for health care organizations that have worked hard on the front lines of the pandemic.”

Despite the criticism, the squid has established itself as a new local attraction.

It is lit up at night, drawing even more attention.

A woman in her 70s who lives near the statue has welcomed her new shiny neighbor.

She said many households in the community are elderly people and the local sentiment tends to be negative.

“But the light of the squid has brightened the mood of our community,” she said.

Shinsan said she becomes hungry just by seeing a picture of the statue.

She believes the statue actually will achieve a purpose of the fund by making the local specialty well known around the nation.

“I have eaten squid in Saga Prefecture but never in Noto,” she said.

Once the pandemic has ended, she wants to fulfill her dream of sticking her head out of the squid’s mouth.