VOX POPULI: Spying on staff is a failed strategy to make them more productive 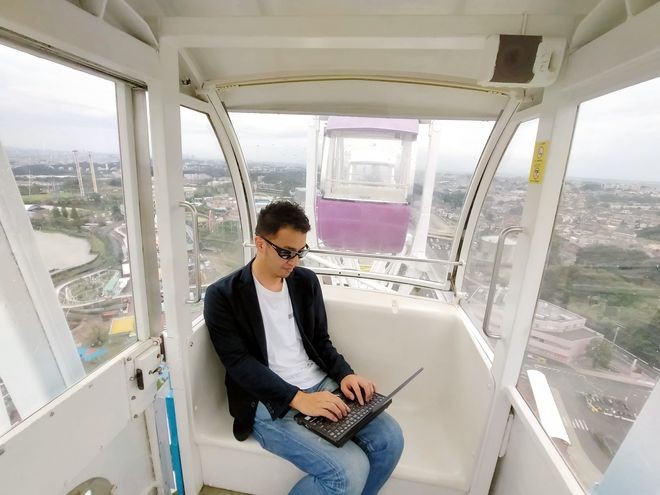 How about teleworking on the Ferris wheel at the amusement park? (Provided by Yomiuriland)

"Modern Times," a 1936 Charlie Chaplin (1889-1977) comedy film, contains scenes of new technology being used in a factory to keep workers under control.

An automatic feeding machine is designed to effectively eliminate workers' lunch breaks by minimizing the time they spend on their midday meal.

But when the machine attempts to put a soup bowl to the protagonist's mouth, it splashes the soup all over his face.

The surveillance camera, on the other hand, works perfectly.

When he leaves his post and smokes a cigarette, the factory president's face pops up on a large screen on the wall, yelling at him to quit loafing and get back to work.

Stressed out by such instances of rigid control, the protagonist suffers a nervous breakdown.

I don't know about automatic feeding machines, but tremendous advances have been made lately in worker surveillance technology. And some technologies are not only applicable to people working from home, but were actually developed precisely for such workers.

According to a recent Asahi Shimbun report, one company installed a software program in its employees' computers that can track their performance in great detail.

The program collects data such as the headings of their emails, browsing histories and the hours they spend working, and sends the data to the company.

The report quoted a company spokesman as saying that the purpose was not to put its workers under surveillance, but I just wonder.

Looking back to the past, outside work gave me a certain sense of freedom. But now that the bulk of my work is done on my computer, I could well be facing a surveillance camera, wherever I am.

In fact, I have heard of software that uses the built-in cameras of computers to take pictures of people at work. This is a bit unnerving.

Some people may be so diligent that even when working from home, goofing off is something that would never enter their minds. And they may keep toiling away, not even breaking for lunch.

Communication, not surveillance, must be the key to ensuring greater efficiency in performance and preventing overwork.