Mountain cafe in Gifu gets helipad for emergencies, entertainment

A helipad has been completed at Cafe Seigaiso, known as the “cafe in the sky,” which sits on top of a 500-meter mountain in Mizunami, Gifu Prefecture. (Noboru Tomura) 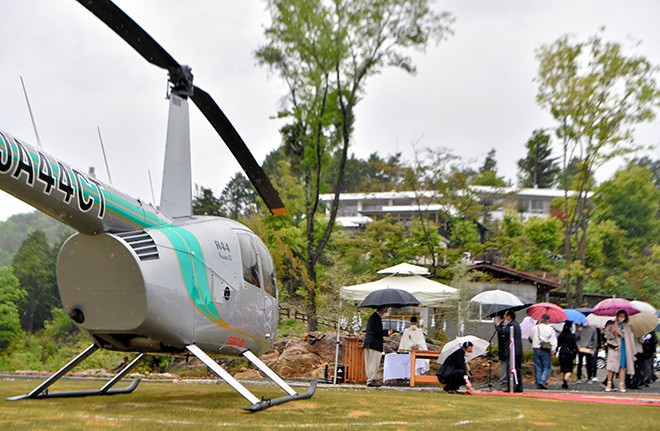 Local residents are invited to Cafe Seigaiso in Mizunami, Gifu Prefecture, to see a take-off and landing of a helicopter on a newly installed helipad on May 5. (Noboru Tomura)

MIZUNAMI, Gifu Prefecture—Reaching new heights, the “cafe in the sky” here has set up a helipad to attract customers from neighboring Aichi Prefecture.

Sitting on top of a 500-meter mountain, Cafe Seigaiso, which opened in 2017, was remodeled from a villa built about 50 years ago.

Visitors can enjoy great views of the Central Japan Alps, Mount Enasan and Mount Byobuzan, as well as high-rise buildings in Nagoya on some occasions.

Manager Takeshi Mizoguchi, 52, said he came up with the idea for the helipad after learning that a restaurant in the prefecture was using one to receive customers from urban areas.

He asked a pleasure flight company if a helipad could be built at his cafe.

The cafe manager invited about 50 local residents for a completion ceremony on May 5. A chopper took off and landed there during the event.

The emergency helipad, about 15 meters in diameter, is open to public use in times of disaster.

It will also be used as a venue for yoga classes, music events and other purposes.

“I want to use the helipad as a springboard to make the cafe an entertaining place,” Mizoguchi said.

He expects demand from participants of lunch tours hosted by the pleasure flight company.