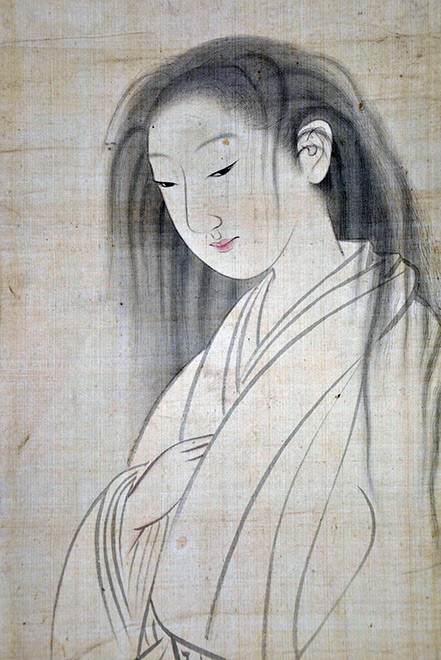 A ghost painting, called “Kenpon Bokuga Tansai Hangonko no Zu” (ink drawing on silk canvas with light coloring, ghost appearing from incense) owned by Kudoji temple, was confirmed to be an authentic work by Maruyama Okyo. (Provided by Hirosaki city education board)

HIROSAKI, Aomori Prefecture--The Hirosaki city board of education has confirmed a painting of a ghost that Kudoji temple has owned for more than 200 years is an authentic work by the famed artist Maruyama Okyo (1733-1795).

This is the first “Yurei Zu” (ghost painting) in Japan confirmed to be an original by Okyo, a popular and influential painter from the Edo Period (1603-1867), according to a member of the city’s cultural property committee that studied it and attested to the work's authenticity.

It was previously believed that the Berkeley Art Museum and Pacific Film Archive of the University of California Berkeley possessed the only ghost painting done by Okyo.

The board of education designated it as a tangible cultural property of the city on May 20, after it received the committee’s report.

The ghost painting is called “Kenpon Bokuga Tansai Hangonko no Zu” (ink drawing on silk canvas with light coloring, ghost appearing from incense), and dates to around 1781.

According to the committee member, the illustration included in the box for the ghost painting, and the writing on the box lid, read “Okyo’s work” and “Morioka Shuzen (1735-1785), Hirosaki Domain’s chief retainer, donated it to Kudoji temple in 1784.”

The committee confirmed the background information by studying gravestones and family registers of deaths that remained in the city.

The ghost paintings owned by Kudoji temple and the Berkeley art museum are similar in composition and were created around the same time, officials said. By comparison, officials said it is “not inferior at all” to the other painting when it comes to the depictions of hair, drawn with fine lines, and the costumes.

It is believed that Morioka Shuzen, who lost his wife and his mistress in succession, asked Okyo to commemorate them in art.

Kudoji temple opens the ghost painting to the public on May 18 in the old calendar every year. The board of education wants to increase the opportunities to show it to the public now that it has been designated a tangible cultural property, an official said.