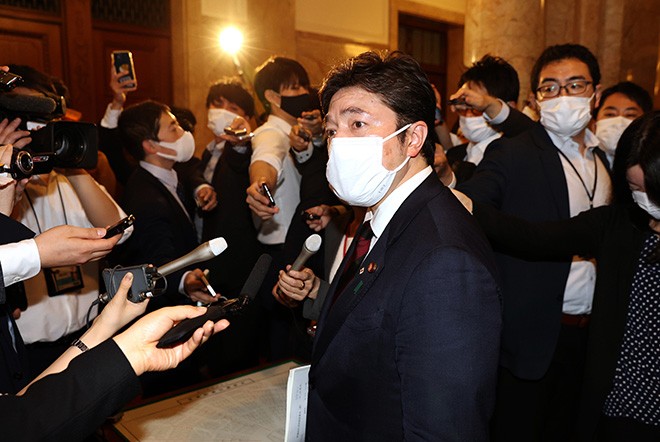 Senior Vice Minister of Defense Yasuhide Nakayama answers questions from reporters about arriving late for the Upper House’s committee on foreign affairs and defense at the Diet on May 20. (Koichi Ueda)

The senior vice defense minister has deleted a controversial tweet that expressed sympathy for Israel and apologized for showing up late to a parliamentary hearing where he would have faced questions.

Yasuhide Nakayama posted a tweet on May 12, during the stretch of violent clashes between Hamas and Israel that recently rocked the Gaza Strip, that called militants launching missiles at Israel “terrorists” and stated that “our hearts are with Israel.”

Waleed Siam, the Palestinian ambassador to Japan, said at a news conference on May 14 that the tweet was racially discriminatory.

Nakayama faced questions in the Diet on May 18 over the controversial tweet.

“Do you think that it is OK for Israel to launch airstrikes?” an opposition party lawmaker asked him.

Opposition parties requested that he retract the tweet, but he refused.

“All parties should avoid escalating the situation further with maximum self-restraint,” he said, and repeated the government’s official line. Japan has maintained a neutral stance on the conflict.

Opposition lawmakers were supposed to question him again at the Upper House’s foreign affairs and defense committee meeting on May 20.

Shinkun Haku, a member of the Constitutional Democratic Party of Japan, had requested Nakayama attend the meeting. But Nakayama arrived late, and the questioning session was canceled. His tweet was deleted later that same day.

According to the Defense Ministry, Liberal Democratic Party lawmakers were initially supposed to hold a question session at the committee at 10 a.m., but it was canceled the day before. That moved up Haku’s timeslot, but Nakayama did not receive the notice for the change.

Nakayama visited the offices of the committee members to apologize to them in person.

“There was a mistake in time scheduling between my office and the Diet staff,” he said. “I would like to apologize sincerely.”

(This article was written by Naoki Matsuyama and Amane Sugawara.)