State to put Okinawa, but not Gifu, under state of emergency 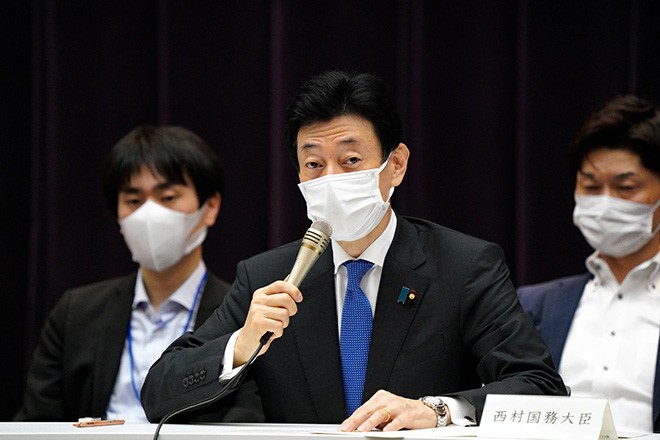 Yasutoshi Nishimura, who heads the central government’s efforts in dealing with the COVID-19 crisis, speaks at the government’s expert panel meeting on May 21. (Ryo Kato)

The government will place Okinawa Prefecture under the COVID-19 state of emergency from May 23 through June 20, but it denied Gifu Prefecture’s request to be added to the list.

The government’s task force dealing with the pandemic officially granted Okinawa Prefecture’s request at a May 21 meeting after the government’s expert panel approved the plan.

“Okinawa Prefecture has reported a large number of new infections,” Yasutoshi Nishimura, who is in charge of the government’s response to the pandemic, told the expert panel meeting. “The occupancy rate of hospital beds for COVID-19 patients and the number of those recuperating also remain very high.”

Okinawa Prefecture confirmed 207 new COVID-19 cases on May 21, breaking the previous high of 203 reported on May 19, the prefectural government said.

Pre-emergency measures have been in effect in the southernmost island prefecture since April 12, but infections began surging after the end of the Golden Week holidays in early May.

Nine prefectures, including Tokyo and Osaka, are already under the emergency declaration, which is scheduled to end on May 31.

The central government decided not to place Gifu Prefecture under the state of emergency, despite its request, after determining the infection situation there was not severe enough.

The government also plans to end pre-emergency measures for Ehime Prefecture on May 23, ahead of the initially scheduled deadline of May 31.

Okinawa Prefecture sought the state of emergency over concerns its health care system would be overwhelmed by new COVID-19 patients.

Prefectural government officials said one resident in her 90s in the capital of Naha died from the disease on May 21.

The accumulative number of infections in the prefecture is now 14,701, while its death toll in the pandemic has reached 148.

The U.S. military stationed in Okinawa told prefectural officials that three workers at the military bases newly tested positive for the novel coronavirus.

A total of 1,352 people related to U.S. military facilities in Okinawa Prefecture have been confirmed infected with the virus, according to the prefectural government.