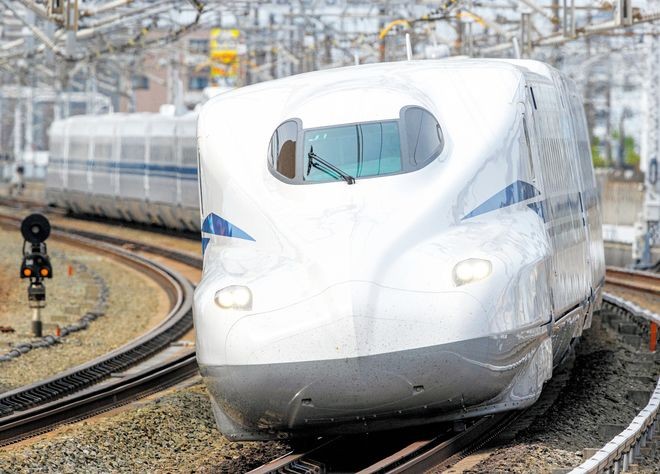 When the driver of a high-speed Shinkansen between Tokyo and Shin-Osaka stations felt the urgent call of nature, he left his post rather than making a mess.

He summoned a conductor, who had no license to operate the bullet train, into the driver's cabin before rushing to the restroom, the victim of a bad stomach ache.

While Central Japan Railway Co. (JR Tokai), which operates the bullet train line, said the driver violated in-house rules, others on social media and elsewhere expressed sympathy for the driver.

The case in question occurred while the Tokaido Shinkansen Line train was traveling between Atami and Mishima stations on May 16.

JR Tokai officials said the 36-year-old driver of the Hikari 633 train, bound for Shin-Osaka Station from Tokyo Station, had an upset stomach.

He thereupon called the head conductor, also 36, into the driver's cabin and went out to use a toilet in a passenger cabin, at 8:14 a.m. after passing Atami Station.

The Shinkansen was running at 150 kph at the time. The driver was back at his post in about three minutes.

The JR Tokai officials said the train driver with the abdominal pain should have called a control center, which administers train operations, to ask for instructions. He would have been allowed to change posts with a conductor only if one with a license to operate the train had been aboard.

The driver also had the option of stopping the Shinkansen at his own discretion, the officials added.

In the situation, however, the head conductor was not qualified to operate the train. Nor did the driver contact a control center.

Instead, he set the handle of the master controller to the neutral notch, which amounted to taking his foot off the gas pedal, and called in the head conductor at his own discretion. He was quoted as explaining that he believed the head conductor was qualified to operate the train.

“I thought it would be too disgraceful for a professional like myself to stop the train for something like that,” the man, who has been a train driver for eight years, is quoted as saying.

JR Tokai had a precedent in March 2001, in which another Shinkansen driver left his seat while his bullet train was on the move. He vacated his post for a maximum of about five minutes aboard an out-of-service train to look for his uniform cap, the officials said.

The latest case, the second of the sort, is the first to have taken place with passengers aboard, the officials added.

JR Tokai believes that the driver violated the government’s ministerial order as well, so the Nagoya-based company has reported the case to relevant authorities, including the transport ministry.

The need to use a restroom, however, does arrive without notice, and inevitably. Some online posters therefore said on social media that they felt sorry for the train driver.

“Someone qualified as a stand-in driver should be assigned aboard,” one poster said.

“Just going to the restroom should be allowed,” said another.

JR Tokai officials said there was one case during the past decade wherein the departure of a Shinkansen was delayed when the driver suffered a health problem.

A JR Tokai employee said one Shinkansen driver he knows would bring a diaper with him because bullet trains have to travel longer stretches than trains along conventional lines.

A representative of East Japan Railway Co. (JR East), which operates the Tohoku Shinkansen Line, said no portable toilet, medicine or other similar supplies are available in the driver’s cabin on its bullet trains, so drivers must bring those items on their own.

In 2016, the driver of a train along the JR Sobu Line, also operated by JR East, opened the door of his cabin that was not facing the platform and urinated onto the tracks while the train was stopped at Sakura Station in Chiba Prefecture.

“The desire to relieve myself was distracting me from my tasks,” the driver in his 50s, who succumbed to the call of nature, was quoted as saying. “I was afraid I would fall behind on my work if I went to the toilet.”

Another JR East employee, who used to drive trains along conventional lines in the past, said he would halt his train at a station and rush to a restroom on the platform or elsewhere whenever the need to use a restroom became unbearable for him.

“The only thing you could do is to be careful about your body, such as by not drinking too much,” he said. “You just can’t wait until the ‘next stop’ while you are driving a Shinkansen, which has to travel long stretches.”

“The right approach the driver should have taken is to stop the train temporarily before leaving the cabin and going to the toilet,” said an official with the Railway Bureau of the transport ministry, which received the report from JR Tokai on the latest case.

“I had never heard of any other case in which the driver left the cabin to go to the restroom on a Shinkansen,” the official added. “The latest case may have been unprecedented.”

(This article was written by Katsumoto Horikawa, Masanori Isobe and Takashi Ogawa.)