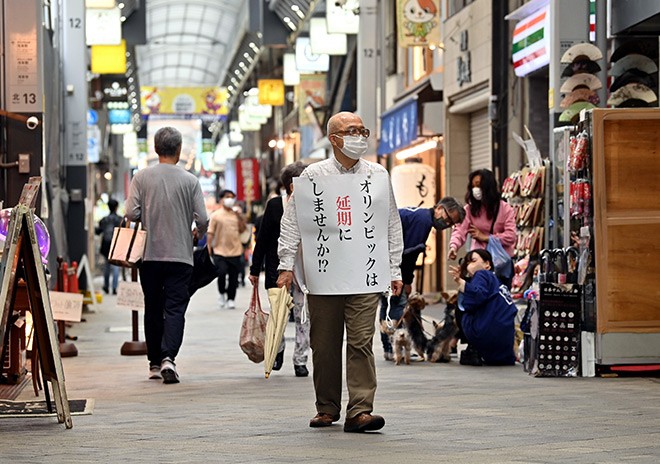 The Tokyo resident makes his views clear with a message that reads, “Why don’t we postpone the Olympics?” in the capital's Taito Ward on May 13. (Yosuke Fukudome)

A 74-year-old pensioner admits to feeling bashful about parading daily along a shopping street in Tokyo’s Asakusa district with a message emblazoned front and back that reads, “Why don’t we postpone the Olympics?”

“I am embarrassed to do this,” he said. “If I had some other choice, I would not want to do this.”

But the resident of the capital's Taito Ward reckons he has no other option. He wants to make a point and have his voice heard, so he decided on a silent protest.

The man began his daily routine in early May. He spends about three hours in the neighborhood each day, strolling up and down without uttering a single word.

The man remains convinced that hosting the Tokyo Olympics this summer while Japan is struggling to contain novel coronavirus infections is wrong and unwise.

The death toll in Japan from COVID-19 has already surpassed the 12,000 mark since last year, with 80 percent of fatalities occurring since December. And the nation is now battling variants that are more contagious and potentially more deadly while health care systems are being overstretched.

Opinion polls have consistently shown that 70 percent or so of voters are opposed to holding the Games in July and August.

“Many athletes are wondering what they should do with regard to the Olympics,” the man said. “What I am certain of is that now is not the right time.”

The man said most of the people he passes each day show no reaction.

But a few turn back or nod their heads in agreement. “I totally feel the same way as you,” one person said.

He also occasionally encounters people who disagree with his views.

“Postponing the Olympic events will be devastating to the athletes,” one person told him.

The man said he is resolved to continue with his silent walk until the Tokyo Olympic organizing committee offers a detailed presentation of how it intends to run the Summer Games.