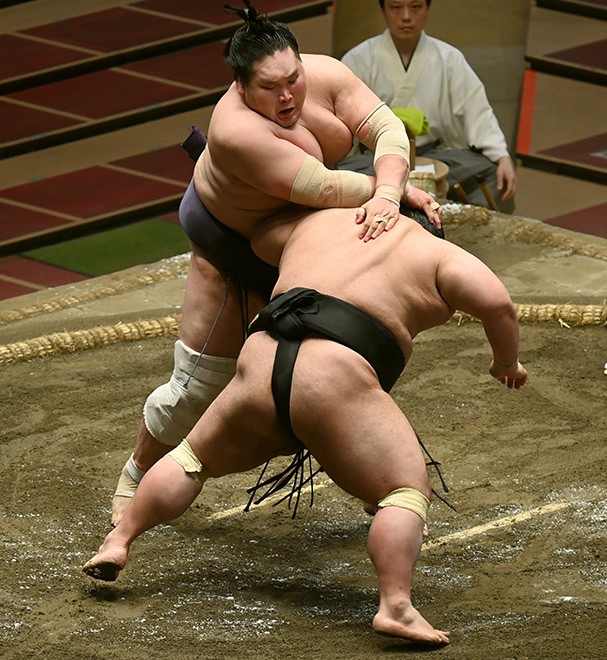 Ozeki Terunofuji forces ozeki Takakeisho to the dirt in a playoff at the Summer Grand Sumo Tournament held at Ryogoku Kokugikan in Tokyo on May 23. (Kotaro Ebara)

Ozeki Terunofuji grabbed his fourth career championship on May 23, defeating fellow ozeki Takakeisho in a playoff at the Summer Grand Sumo Tournament in Tokyo.

It was Terunofuji’s first victory as ozeki. The 29-year-old Mongolian returned to the sumo’s second highest rank during this tournament after also winning the championship in March.

His victory raised his hopes for being promoted to yokozuna if he clinches another championship in the July contest.

After being handed the Emperor’s Cup at Ryogoku Kokugikan in Tokyo, Terunofuji acknowledged in an interview that being promoted to the highest rank is not something a wrestler can attain even if he strives assiduously.

“But I will work hard to my best of my limits and want to walk with my head held high even if I cannot reach the rank,” he said.

With a 12-2 record, Terunofuji entered Day 15 with one win ahead of his closest rivals Takakeisho and Endo, maegashira No. 8.

But Endo lost to Shodai, another ozeki, shattering his hopes of remaining in line for the championship.

On the last bout of the tournament, Takakeisho finally caught up with Terunofuji with a quick victory to move on to a playoff.

But Terunofuji did not dwell on his defeat and overpowered Takakeisho in the playoff.

Terunofuji remained invincible until Day 11, when judges determined in a reversal of a referee’s initial judgment that Myogiryu, maegashira No. 4, won because Terunofuji grabbed him by his hair.

Terunofuji lost to Endo on Day 14 and Day 15 to finish with a 12-3 record. But still he emerged as champion.

Terunofuji was first promoted to ozeki when he was 23. But he has a history of knee injuries and other ailments that forced him into the second lowest jonidan division.