Memorial service held for Sri Lankan who died in detention 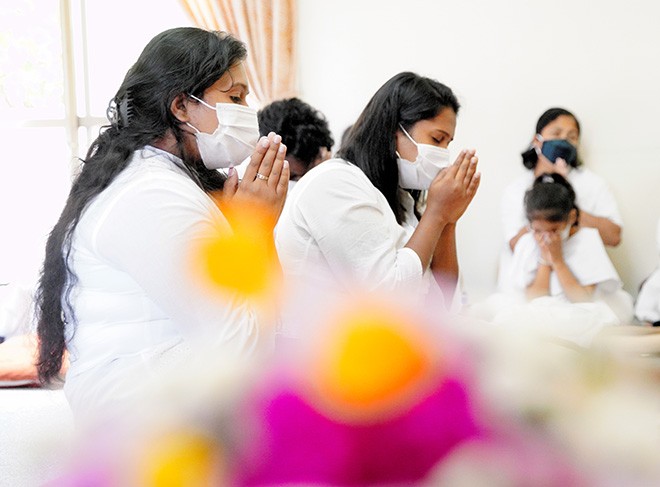 The memorial service for Wishma Sandamali held at a temple was attended by her younger sisters Wayomi, center, and Poornima, left, along with other Sri Lankans in Fujinomiya, Shizuoka Prefecture, on May 23. (Rei Kishitsu)

FUJINOMIYA, Shizuoka Prefecture--Bereaved family members and Sri Lankans living in Japan attended a Buddhist memorial service held at a local Sri Lankan temple for a woman who died at an immigration detention facility in March.

About 100 people turned out for the service on May 23 to commemorate Wishma Sandamali, 33.

Buddhist parishioners prepared arrangements of roses and carnations in vases that were offered at the altar.

According to the chief priest, Hurulle Sudhamma, 38, Sandamali visited the temple two and a half years ago when she lived in Shizuoka Prefecture, before she was detained.

Her younger sisters, Wayomi, 28, and Poornima, 26, both attended the service.

Wayomi said her elder sister had helped out a lot at the temple. She said she liked to talk to the people who gathered there, and showed her appreciation.

Sandamali was detained in August 2020 at a facility operated by the Nagoya Regional Immigration Services Bureau for overstaying her visa.

She became ill around mid-January this year and suffered from nausea, vomiting and a poor appetite. As her symptoms worsened, she lost about 20 kilograms and had difficulty walking.

She died on March 6.

Sandamali applied for provisional release twice since December, but her applications were turned down. It is still not clear how she died.

Her family members are trying to obtain the surveillance camera video footage of her at the facility to get to the bottom of her death. But the Justice Ministry is refusing to disclose the video.