Prefectures rush to set up own mass inoculation sites for seniors 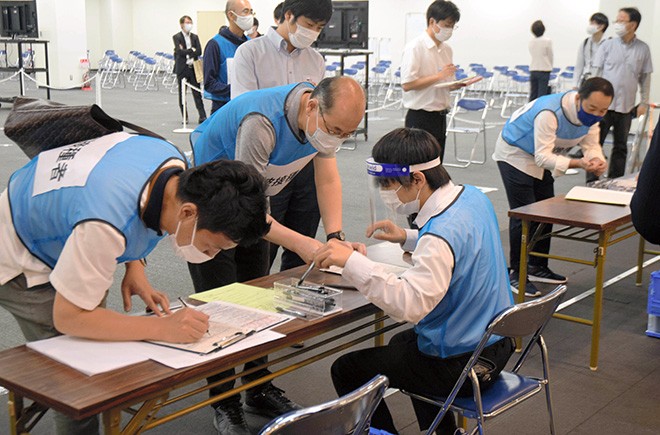 With concerns rising about the snail's pace of the COVID-19 vaccine rollout, Osaka, Kyoto and 13 other prefectures have either opened or plan to open mass vaccination centers for seniors, according to an Asahi Shimbun survey.

In addition, Tokyo, Hokkaido and 15 other prefectures are considering following suit.

However, a challenge cited by most of these prefectures is securing large numbers of health care workers to administer doses, the survey showed.

Municipalities across the nation began the rollout for people 65 or older on April 12 as the main organizers of the inoculation program.

But a calculation by The Asahi Shimbun, based on data from the Cabinet Office and official figures of registration of residents as of January 2020, showed that the share of seniors who have received at least one dose totaled only 2.6 percent as of May 16.

Japan has an elderly population of about 36 million.

Tokyo and the three neighboring prefectures of Saitama, Chiba and Kanagawa are home to 9 million seniors.

Prime Minister Yoshihide Suga set a target of completing immunizations of residents 65 and older by the end of July.

The central government is pushing the mass immunization drive under a slogan of “1 million jabs a day.”

It plans to provide prefectural authorities with subsidies to set up vaccination centers supplied with U.S. drug maker Moderna Inc.’s vaccine, whose use was authorized in Japan on May 21.

Of these, Miyagi, Gunma and Aichi prefectures were expected to begin administering doses on May 24, according to the study.

Miyagi’s daily target is 2,100 doses, while Gunma began with 100-200 jabs and will eventually increase that number to 1,000. Aichi aims to achieve 3,000 shots by setting up two mass vaccination sites.

Saitama will open such a venue on June 1, while Tokushima is eying an early June opening.

Kyoto, Osaka and Hyogo plan to set up centers in the middle of June.

The targeted daily doses widely vary from one prefecture to the next. Tottori said its target is from 200 to 400 per day.

Hyogo said it will establish a mass vaccination center to make doses available to residents with underlying health conditions as soon as possible by completing the rollout for the elderly.

Saitama is seeking to make up for local governments that are unlikely to finish the vaccination schedule by the end of July.

Gunma will open a mass vaccination center in an area where the ratio of doctors and nurses is low on a per capita basis.

Niigata, one of the 17 prefectures considering mass vaccination centers, said it will be a big plus for the prefecture to set up a mass site as the effort secures supplies of Moderna vaccines from the central government.

Tokyo is still considering setting up its own center for the elderly.

But Tokyo officials said on May 21 that they will use the former site of the Tsukiji fish market in Chuo Ward to inoculate police officers and firefighters in the capital.

Despite the 1 million doses per day slogan by the central government, the maximum the country can fulfill currently is 500,000 doses.

Taro Kono, a minister in charge of coordinating the vaccination program, urged local authorities on May 21 to speed up mass inoculations using the Moderna vaccine, which the government has contracted for 50 million doses.