Mass inoculation of seniors starts in Tokyo, Osaka and elsewhere 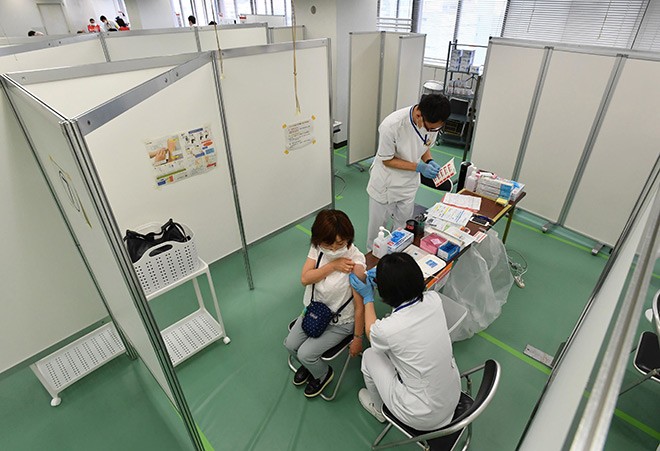 A member of the Self-Defense Forces administers a COVID-19 vaccine dose at the mass vaccination center in Tokyo’s Chiyoda Ward when it opened on May 24. (Pool)

Seniors who received COVID-19 shots at mass vaccination centers that opened in Tokyo and Osaka on May 24 expressed relief at getting in quicker than at sites operated by their municipalities.

In Tokyo, a resident of Suginami Ward was administered a jab at 8 a.m. at the inoculation center set up in a central government building in Chiyoda Ward.

The man, who will turn 65 this year, said he canceled an appointment he had made with his ward as he could secure a slot at the mass vaccination site, part of the central government program.

“I am feeling safer since I got my first jab,” said the man, who will be traveling to Indonesia to teach Japanese when the novel coronavirus pandemic is brought under control.

The shots at the Tokyo and Osaka sites for people aged 65 or older are being given by doctors and nurses with the Self-Defense Forces.

Prime Minister Yoshihide Suga is pushing to complete the inoculations of Japan’s 36 million seniors by the end of July.

On May 24, 5,000 doses and 2,500 doses will have been administered at each site, respectively. Vaccinations will be doubled at both locations starting from next week.

For this week, those eligible to get vaccinated are seniors living in the capital’s 23 wards and in Osaka.

The eligibility will be expanded to all the elderly in Tokyo and Osaka Prefecture from next week.

At the Osaka location, a 69-year-old man in Osaka who cares for his mother, 96, was among the first recipients.

“I was worried about being infected with the coronavirus as I heard that a variant is more transmissible,” he said. “I feel at ease now after enduring many days of being anxious.”

The Osaka vaccination center was set up in the Osaka International Convention Center in the city’s Kita Ward. A free bus ride is being offered to the site from JR Osaka Station and Nankai Electric Railway Corp.’s Namba Station.

Many prefectures are also moving to set up their own vaccination centers to accelerate the vaccine rollout.

The Aichi prefectural government set up two mass vaccination locations in the prefecture--one in Fujita Health University Hospital in Toyoake and the other at Nagoya Airport in Toyoyama, with a capacity of a combined 3,000 jabs a day.

Seniors in Nagoya qualify for a shot. The elderly in other municipalities will be included at a later date.