VOX POPULI: Fingers crossed for clear skies on night of May 26 for blood moon 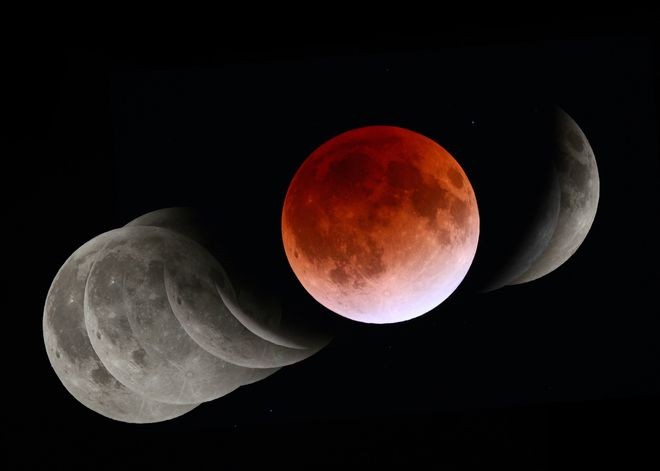 This synthesized photo of the motion of the moon every 20 minutes shows a total lunar eclipse, producing a blood moon, center, on Dec. 10, 2011, in Osaka. (Asahi Shimbun file photo)

Set in an Indian village where it has been raining for days, villagers are preparing for a lunar eclipse. Eager for even just a glimpse of this celestial event, they are setting up a viewing platform of bamboo and chanting for the clouds to go away.

This is a documentary film, but it is suffused with lyricism. The moon is beautiful when it miraculously peeps out from a break in the clouds.

I never knew of any overseas culture that made such a big deal of a lunar eclipse--not a solar eclipse.

No matter how hard I tried, I could not recall a single childhood memory of getting all worked up in anticipation of a lunar eclipse.

This astronomical phenomenon has generated a wide variety of folklore.

People of the Inca Empire, who wove a tale of jaguars attacking and devouring the moon, made their dogs bark during lunar eclipses to drive the big cats away.

The ancient Chinese interpreted the phenomenon as being caused by a dog that climbed a tree and reached the "heavenly palace" to bite into the moon.

On May 26, a total eclipse of the moon will take place for the first time in three years in Japan, and it will be visible in the sky across the nation.

And the moon will be a so-called supermoon, which occurs when it is positioned closest to Earth. Dubbed the Super Flower Blood Moon in English-speaking countries, it will present the greatest astronomical show in recent years.

The "flower" derives from the fact that May is the month of blooming flowers, while the "blood" denotes the moon's coppery red color.

Since this event will not be easily observable in Europe and the United States, the best places to enjoy it are said to be in Japan, Australia and Hawaii.

In Japan, the total eclipse will take place around 8:09 p.m.

What the weather will be like is our biggest concern. In imitation of the entire population of the Indian village awaiting the lunar eclipse in the film, I pray that the sky will be clear, even just for the duration of this celestial event.