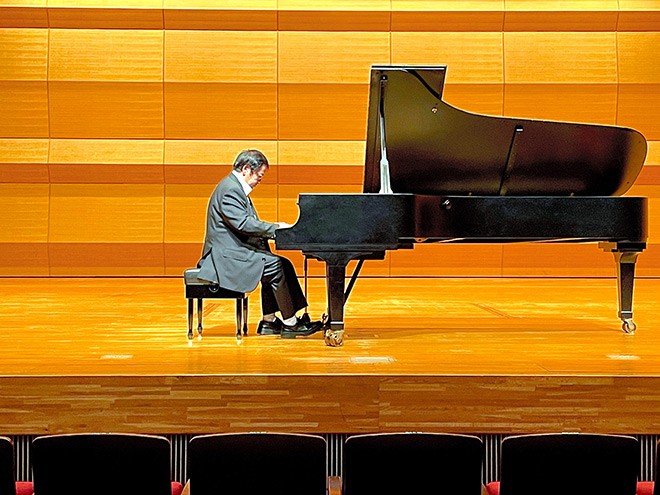 SAGA--Yoshiaki Tokunaga had often performed in front of audiences, but when the seaweed farmer faced down a staggering 1,700 people, he felt so nervous he thought he would faint.

Tokunaga, 60, played Franz Liszt’s “La Campanella,” a notoriously difficult piece, as the opening act for a concert featuring Fuzjko Hemming, the famed pianist who inspired him to start playing the piano nine years ago.

Tokunaga moved his thick fingers from side to side on the keyboard at an incredible speed at the Kita-Kyushu Soleil Hall on April 16.

When he took a bow after the performance, Tokunaga was met with great applause. Feeling obliged to liven up the mood, he raised his hands and made peace signs with his fingers to get a laugh.

“I made many mistakes,” he said. “But the audience enjoyed my performance for what it was and kindly applauded.”

When he thanked Hemming for the opportunity after the show, the pianist told him she would invite him for another concert in the Kyushu region, he said.

Tokunaga, who grows nori seaweed in Saga, started teaching himself piano in spring 2012 after he saw Hemming on TV playing “La Campanella,” a six-minute composition considered to be one of the hardest to play on the piano.

He used to play pachinko, a kind of pinball game, from spring through autumn, when nori farming is out of season.

He made up his mind to kick the habit after he lost big from that pastime for the first time: 700,000 yen ($6,400) over a two-month period. His wife, Chieko, 59, once chewed him out after he tried to take money out of her purse.

Around the same time, Tokunaga watched Hemming’s performance on TV. He was inspired by it and wanted to play “La Campanella.”

When his wife, who is a piano teacher, told him that would never happen, the fisherman felt even more motivated.

But he could not even read music.

Undaunted by the mountainous task before him, he turned to the internet and found a video of a piano where the keys light up in rhythm with the melody of “La Campanella.” He followed each sound to learn how to move his fingers.

Tokunaga practiced piano at his home at least six hours a day, sometimes eight. It slowly came together, and after about two months he could play the piece at least from start to finish. He was too self-conscious to ask Chieko to teach him how to play.

Tokunaga posted a series of video clips on YouTube titled “La Campanella Oyaji no Chosen” (How a middle-aged man took on La Campanella) to show how much his skills have improved. His motivation was renewed when he read admiring comments from viewers.

The self-taught musician increasingly found himself playing in front of people, and gained recognition after performing in competitions.

Tokunaga soon began to attract media attention. In 2019, he was invited to play “La Campanella” in front of Hemming for a TV program.

“She told me that my personality was conveyed through the sound,” he said. “I felt I was praised for how I cherish each note when I play.”

Hemming later asked Tokunaga to perform at her concert.

But since he only moonlights as a pianist, Tokunaga had to work as a nori farmer until April 9 and only had one to two hours a day to practice.

Once April 10 rolled around, Tokunaga stepped up his practice time to five hours a day. With only one week to go before the big day, however, he developed pain in his wrists and at the base of his fingers.

“I was cracking under the pressure and made mistakes where I normally wouldn’t,” he recalled. “I couldn’t sleep at night, thinking about the concert.”

He applied cold compresses to soothe his sore hands until just before the performance, but in the end he was far too nervous to feel the pain once he was on stage.

He felt he was not able to reach his stride and was not satisfied with his performance.

“I want to play the piece without a mistake the next time,” he said.

As Tokunaga listened backstage to Hemming perform “La Campanella,” he was inspired to work toward her level of excellence and perform it once again in front of her.

“I hope she will invite me to her concert in my hometown of Saga some day,” he said with a mischievous smile.