MIT: Masks are most popular in countries with high collectivism 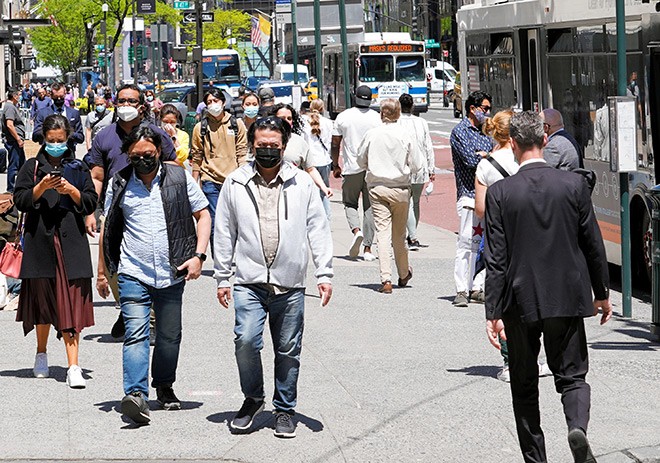 Pedestrians come and go on the street wearing face masks in New York on May 14. (Daisuke Nakai)

The more a society values the collective interest over that of the individual, the more likely that people in it are wearing face masks amid the COVID-19 pandemic, a team led by a leading U.S. research university found.

Though wearing face masks can help prevent the virus from spreading, the mask-wearing rate varies greatly depending on countries and regions.

To determine why some have embraced mask wearing more than others, the team, led by the Massachusetts Institute of Technology, compared the degree of collectivism in general in the United States with other countries and regions and between U.S. states.

Researchers analyzed the relationship between the collectivism the location had and the rate of mask wearing there.

“Understanding the cultural differences will be useful for future crises,” a team member said.

The United States and Britain, where the tendency toward individualism is higher, had lower mask-wearing rates, while South Korea, Thailand and the United Arab Emirates where collectivism is more valued had higher rates.

Hawaii and other U.S. states, where there is thought to be a higher collectivistic tendency, had high mask-wearing rates, while North Dakota and Montana, believed to put more value on individualism, had lower rates.

The study showed that though Japan has a higher collectivistic tendency than Western countries, it has a lower tendency than other Asian or Central and South American countries. Japan's mask-wearing rate was more than 95 percent, the study found.

Even when countries' differences in political systems and how widely COVID-19 had spread there had been taken into account, the tendency for mask wearing to be higher in locations that were less individualistic remained, the study said.

The study utilized two data sets collected by Facebook Inc. and other research firms for the United States and another two for other countries and regions, which covered more than 900,000 people in total.