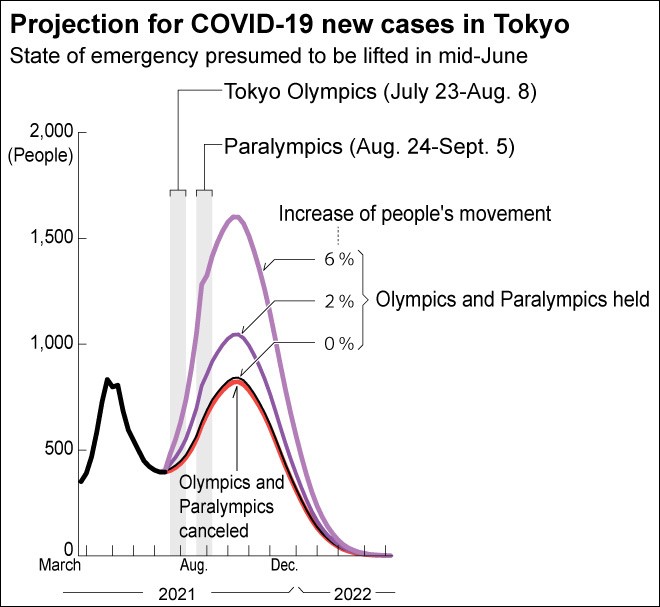 Strict restrictions of movements of people in Tokyo for the Summer Olympics and Paralympics could reduce the spread of novel coronavirus infections to near the same level if the events were called off, researchers said.

But a number of other factors must be in place for such a scenario to happen.

The projection was made by Taisuke Nakata, an associate professor of public policy, and Daisuke Fujii, a project assistant professor of economics, both of whom are with the University of Tokyo.

They said that crowding in the capital would cause far more new COVID-19 cases than the arrival of 100,000-plus people from overseas for the events.

The study premised that 105,000 people would come from overseas, including journalists. Half of them would be vaccinated against virus, while 100 would enter Japan after testing negative at the time of their arrival.

The research showed that if a new wave of infections emerged after the Olympic Games, the daily case numbers would peak in mid-October--if the current state of emergency for Tokyo is lifted in the middle of June and if 600,000 vaccine doses are administered daily across the nation.

If the Games did not cause any additional increase in economic activity and people’s movements, the number of daily new COVID-19 cases would reach a peak of 842, according to the researchers.

If the Olympic and Paralympic Games are called off, the study put the daily count of new cases at 822 in the middle of October.

They said the key to stemming the spread of the novel coronavirus is to significantly curb movements of people by avoiding holding public-viewing gatherings and other events during the sports extravaganzas.

If people’s movements increased by 2 percent and 6 percent, new daily infections at the peak time would reach 1,046 and 1,600, respectively.

Crowds at these heightened levels have been recorded during the cherry blossom viewing season, according to the study.