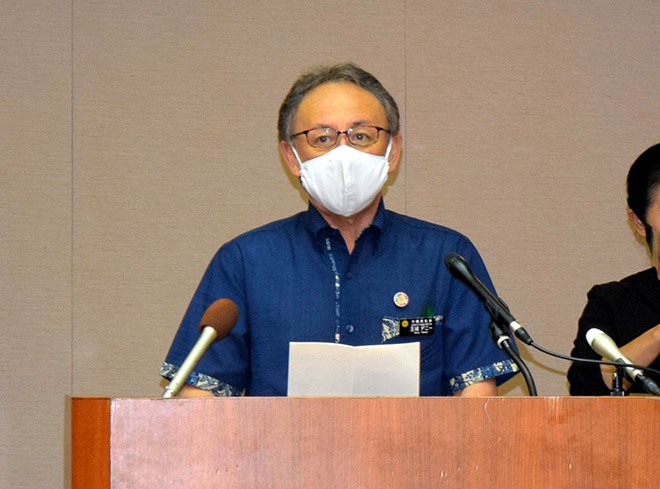 Okinawa Governor Denny Tamaki at a news conference in Naha on May 21, two days before a state of emergency for the southernmost prefecture began over the novel coronavirus (Mika Kuniyoshi)

Okinawa Prefecture had a record 256 new COVID-19 cases on May 25, raising the prefecture’s accumulated total to 15,448, health officials said.

The previous daily record was 231 on May 22, the day before the southernmost prefecture was placed under a state of emergency over the pandemic.

New infections per 100,000 people over the most recent week stood at 86.85, the highest in the nation, prefectural officials said.

Routes of transmission are unknown in more than 60 percent of the new cases, suggesting the extent of community infections, they added.

Two new cases were reported among members and other personnel of the U.S. military in the prefecture the same day, according to the prefectural government, bringing the overall total to 1,358.

In Hokkaido, which is also under a state of emergency, 459 new COVID-19 cases were logged on May 25, compared with 532 a week ago.