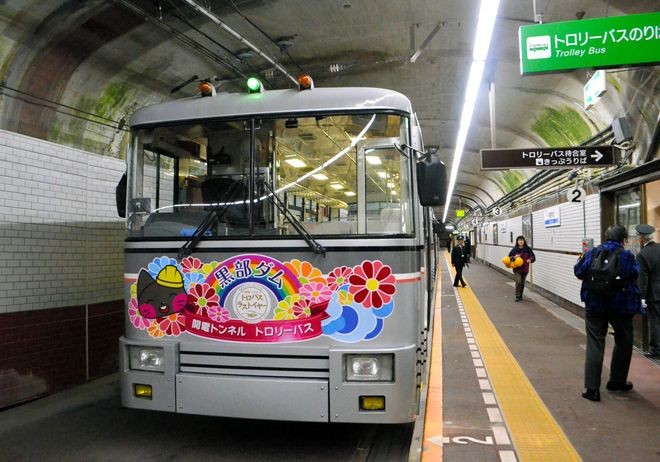 It was built to preserve the history of the Kanden Tunnel Trolley Bus, which served a total of 60 million passengers as the sole means of transportation to and from Kurobe Dam, the tallest dam in Japan.

Operation began in 1964 and ended in 2018, having remained accident-free throughout the years.

The entire fleet of 15 cars was initially destined for the scrap heap.

But calls for their preservation continued, and the city of Omachi, which forms the gateway to Kurobe Dam, decided to save the last remaining car by raising 1.8 million yen ($16,500) through crowdfunding.

In no time, the donations grew to more than three times the target amount.

"The trolleybus was practically a symbol of Omachi," said Mitsuaki Miyasaka, 51, a municipal official. "We wanted to preserve it, but the city had no budget, and we had to abandon the idea at one time."

He recalled being overjoyed by the unexpected success of the first online fund-raising attempt ever made by the city.

And the city received messages from donors.

"The trolleybus represents a precious memory of our family trip," one said.

"I rode it many times as a member of the mountaineering club at my university," reminisced another, and yet another claimed, "My late father was one of the men who dug the Kurobe Tunnel."

Many of the donors were fans of the trolleybus in and outside the prefecture.

In the 1968 blockbuster film "Kurobe no Taiyo" ("The Sands of Kurobe") that depicted the struggles of workers engaged in the dam construction project, the protagonist, played by Toshiro Mifune, appeals passionately to his colleagues: "Let's believe in something that will make the impossible possible."

The men encountered many setbacks, including a cave-in and flooding, but they remained undaunted and successfully completed the project that once seemed doomed to fail.

Next month will mark the 50th anniversary of the full opening of the Tateyama Kurobe Alpine Route, which spans Toyama and Nagano prefectures.

Compared with the Kurobe Dam project that was dubbed "the most difficult undertaking of the century," the work done on preservation of a trolleybus was much smaller in scale.

Still, the fervor of the people who fought to save the last trolleybus from oblivion was just as intense.