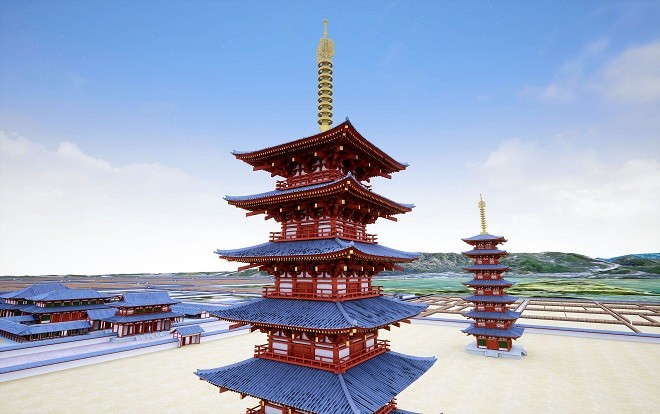 NARA--Daianji temple, touted as one of the Seven Great Temples of Nara, is creating a CGI reconstruction of its huge “daigaran” main structures from the Nara Period (710-784).

Temple officials plan to allow visitors to take a virtual tour of the original temple grounds and the ancient capital of Heijokyo in or around October 2022.

The project is aimed at showing online visitors what Daianji temple looked like in bygone times and getting them to think about its historical importance.

Daianji is Japan’s first temple founded by the government.

Its predecessor was Daikandaiji temple from the Asuka Period (592-710), and it was relocated to its current location in an urban area about 1.5 kilometers south of JR Nara Station after the capital moved to Heijokyo in 710.

At its heyday in the early Nara Period, Daianji temple was apparently complete with east and west pagodas and about 100 halls and housing facilities on a 260,000-square-meter site. But it was reduced in scale over time and currently covers about 10,000 square meters.

It is still considered on a par with the World Heritage sites of Todaiji and Kofukuji temples in Nara.

Many houses now stand on the land formerly owned by Daianji temple, making it practically impossible to rebuild the daigaran structures in real life.

Based on historical documents and excavation results, experts at the Nara National Research Institute for Cultural Properties provided advice on how the main structures were arranged and how to reconstruct the old buildings.

The main hall, the seven-story east and west pagodas, housing units for priests, and other buildings will also be recreated, in addition to the cityscape of Heijokyo surrounding the temple grounds.

An aerial view of the virtual temple will also be provided by a “drone.”

The CGI project costs about 20 million yen ($183,300), part of which will be covered by a crowdfunding campaign slated to start in autumn and corporate support money.

Although the structures will initially be seen only from the outside, the officials are considering ways to recreate the interiors whose details remain unknown.

“It is lesser known among the Seven Great Temples of Nara, but we want many people to know that there was a great temple here,” said Yusho Kono, vice chief priest at the temple.