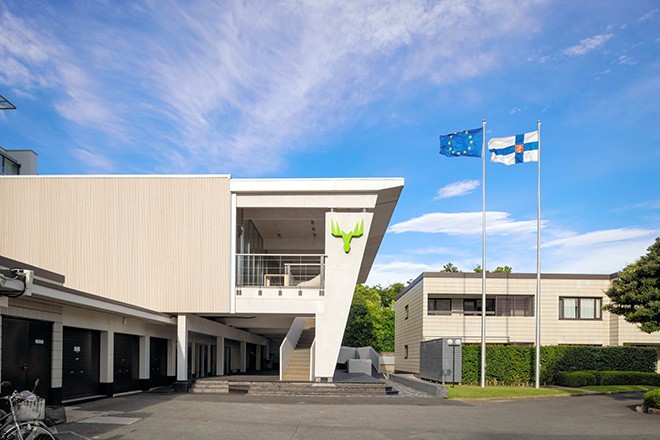 Finland House, a temporary facility made of wood, is built in the parking lot of the Finnish Embassy in Tokyo. (Petri Asikainen for Business Finland)

The COVID-19 pandemic has prompted a number of countries to scrap plans to set up “national house” hospitality facilities in Japan that would showcase their cultures and attractions during the Tokyo Olympics.

Such facilities have traditionally been built in the Olympic host nation, allowing interactions among visitors and giving competitors places to relax.

A representative of Brazil’s National Olympic Committee said the South American country has opened a national house for each summer event since the 1996 Atlanta Olympics.

But in January, the committee withdrew its plan for a national house in Tokyo.

The pandemic led to a sharp depreciation of the real, Brazil’s national currency, making the project way more expensive than expected, the committee said.

“It is sad, but we have to think rationally,” the representative said, adding that the committee plans to host online events instead.

More than 30 countries, including Japan, opened national houses at the 2016 Rio de Janeiro Olympics. Athletes used these facilities to hold news conferences while foreign visitors could enjoy cultural experiences there.

However, Olympic organizers have announced a ban on foreign spectators at the Tokyo Games, as well as strict guidelines intended to keep athletes in the “bubble” to prevent the virus from spreading.

Those measures have left participating nations with little direct benefit from carrying on with their national house projects.

Germany canceled plans to set up a “German House” for the Tokyo Games because of the restriction on movement, a company that operates and supports the project said.

The U.S. Olympic and Paralympic Committee has abandoned a plan to open “USA House” on the premise of Tokyo American Club in the capital’s Minato Ward to provide a place for rest and relaxation for athletes and their family members.

“We have decided not to operate the facility, considering the number of spectators will be limited,” a representative said.

Last autumn, Finland opened a temporary exhibition space made of wood at its embassy in Minato Ward.

A representative of the embassy said the facility will remain open until the end of the year and “hopefully host some Olympic-related events in some way.”

The Japanese Olympic Committee initially planned a “Japan House” at the Japan Olympic Museum in the capital’s Shinjuku Ward, near the new National Stadium, and other locations.

Under the plan, which came with a 100-million-yen ($920,000) price tag, sushi, tempura and sake would be served, while guests would be entertained in a salon.

But the plan fell apart when the Tokyo Games were postponed last year due to the pandemic.

Even if the sports event is held this summer as scheduled, “interacting with people itself will be difficult,” a JOC representative said.

The JOC is currently weighing the pros and cons of opening a Japan House and is expected to draw a conclusion in June.

(This article was written by Yuko Kawasaki and Kogo Shioya.)