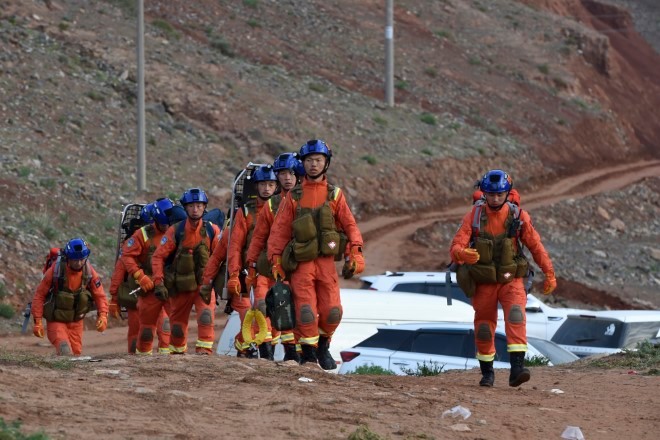 In this photo provided by China’s Xinhua News Agency, rescuers walk into the accident site to search for survivors in Jingtai County of Baiyin City, northwest China’s Gansu Province on May 23. (via AP Photo)

BEIJING (AP) — Family members of 21 runners who died when freezing rain and strong winds interrupted a weekend mountain race in northwestern China have rejected offers of compensation and want to know how the tragedy could happen, local media reported Wednesday.

Reports said about $150,000 in compensation has been offered for each victim, but family members were quoted as saying that many were breadwinners and were at the top of their sport.

While the race has been held before, runners on Saturday were apparently caught off guard by cold weather and difficult conditions on steep unpaved paths mixing stones and sand.

They were racing on an extremely narrow mountain path at an altitude reaching 2,000-3,000 meters (6,500-9,800 feet) on a 100-kilometer (60-mile) course in the Yellow River Stone Forest tourist site on the outskirts of Baiyin city. Around midday Saturday, freezing rain and gale-force winds halted the race in the northwestern province of Gansu and prompted an all-night rescue operation.

Some 50 of the more than 170 competitors were given shelter in traditional cave dwellings maintained by shepherds.

The newspaper Shandong Business News cited family members who asked not to be identified saying the compensation offered was too little and local authorities had not provided an explanation why things went so wrong. “This was not purely a natural disaster. There was a great deal of human error," the paper quoted one family member as saying.

A compensation sum is usually divided between the state and insurance.

A joint investigation team, including officials from the state meteorological agency and the sports ministry, has moved into Baiyin to begin looking into what lessons can be learned from the disaster, according to the city government's website.

“In being responsible to the victims and to the society, we should fully cooperate with the provincial party committee and the provincial government investigation team to do a good job in the investigation of the incident, find out the reasons in depth and seek truth from facts," the statement said, quoting comments by Baiyin Mayor Zhang Xuchen.