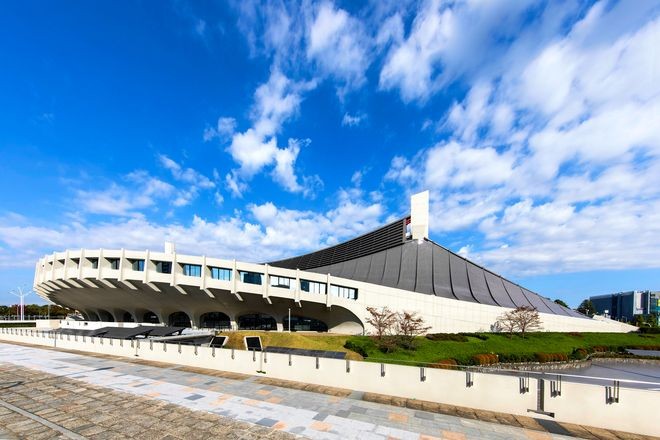 The dynamic exterior of the No. 1 gymnasium of Yoyogi National Stadium (Provided by the Japan Sport Council)

As a 10-year-old boy, Kengo Kuma fell in love with architecture the first time he saw Yoyogi National Stadium, built for the 1964 Tokyo Olympics.

Today, Kuma is a prominent architect in his own right, the designer of the New National Stadium for the 2020 Tokyo Olympics.

But he never forgot the stunning Yoyogi stadium, designed by famed architect Kenzo Tange (1913-2005), which inspired him.

“The architecture reconciles the East and the West by linking Japanese culture with Western-style techniques learned after losing to the West in World War II,” Kuma said. “No other architecture succeeds in embodying the spirit of the Japan’s postwar period of high economic growth in such an excellent manner."

Kuma is now the representative director of a promotional council founded in November last year to seek the stadium's registration as a World Heritage site.

It has been decided that the stadium will be designated as an important cultural property by the Japanese government.

Winning recognition as an important cultural property is said to be essential for being nominated and registered as a UNESCO World Cultural Heritage site.

“The designation marks the first step, and we can say we have now overcome a hurdle,” said Kuma, who is a special designing professor at the University of Tokyo.

The stadium, located in Tokyo’s Shibuya Ward, is comprised of two gymnasiums of different sizes.

As Tange is known as the most renowned postwar architect in Japan, experts anticipate that the campaign staged mainly in the construction industry will prove successful.

In 2016, a voluntary group was set up by architects and cultural figures to seek the Yoyogi stadium’s inclusion in the World Heritage list.

RARE PRAISE FOR A 'MASTERPIECE'

The Agency for Cultural Affairs describes Yoyogi National Stadium as a landmark architecture from the postwar period in a document released in connection with the stadium’s planned recognition as an important cultural asset.

It is rare for governmental agencies to use such a strong expression, but the wording is never exaggerative: the stadium is no doubt a masterpiece among masterpieces in the architectural industry following the end of World War II.

The massive roof of the No. 1 gymnasium reminds viewers of a large temple, while the building’s body forms a winding curve. The dynamic exterior houses an encompassing, magnificent space inside.

The huge roof is supported by a wire linking 40-meter-tall great pillars erected 130 meters from each other. The method and structure adopted for the gymnasium originally designed for swimming events were unprecedented at the time of its construction.

The ceiling of the smaller second gymnasium is suspended from a single pillar.

Can the stadium really be added to the World Heritage list?

Saikaku Toyokawa, an associate professor of city planning at Chiba University and secretary-general of the promotional council, said yes, referring to the Sydney Opera House, completed in 1973 in Australia, which is well known as a modern structure given the World Heritage status.

“The Sydney Opera House actually has an attractive outside appearance, but I feel its exterior is separated from the hall within it,” said Toyokawa, who has authored a book about Yoyogi National Stadium and Tange. “The stadium’s outside design and internal space structure fit each other perfectly, so it can be considered to be better as an ideal modernism architecture that eliminated unnecessary decorations.”

As a step toward the inclusion in the World Heritage list, properties need to be placed in the tentative candidate list in Japan. Local municipalities then work out letters of recommendation for the government to decide which assets to nominate.

UNESCO examines the assessment by its advisory panel, the International Council on Monuments and Sites (ICOMOS), so that the World Heritage Committee can make the final decision.

Yoshiyuki Yamana, an architectural professor at Tokyo University of Science, developed documentation to recommend the National Museum of Western Art as a World Heritage site. The museum in the capital’s Ueno district was successfully registered in 2016.

“When we were making preparations for the recognition of the National Museum of Western Art, some ICOMOS officials said we should push Yoyogi National Stadium first,” Yamana said. “It is extremely highly evaluated globally.”

Yamana, who once served as a vice chairman of the ICOMOS International Scientific Committee on 20th Century Heritage, pointed out that “the epoch-making structure was born as a result of Japan’s acceptance of the modernist architecture movement though the campaign had previously spread mainly in the West.”

According to Yamana, properties have to boast cultural and historical value to be awarded the status, because “the World Heritage system is not aimed at simply commending architectural works.”

“It (Yoyogi National Stadium) is an unprecedented symbol of postwar recovery in mankind’s history,” said Yamana. “It portrays the Olympics as a symbol of cultural interactions and is expected to be used for the latest Games. It will likely be highly assessed from the perspective of sustainability.”

Yamana asserted that the project will “be able to attain the goal unless an improper recommendation is made before UNESCO.”

A remaining challenge is that Yoyogi National Stadium must be selected out of other domestic properties placed on the national candidate list earlier, including Hikone Castle in Shiga Prefecture and the Sado gold and silver mines in Niigata Prefecture.

For that reason, staging a movement involving not only municipalities but also local communities on a grand scale is said to be indispensable.

Kuma and other council members are planning to organize international conferences and symposiums to reach out to citizens to increase momentum for the inclusion.