Young toads head for the top of Mount Homanzan. (Video by Seiji Iwata) 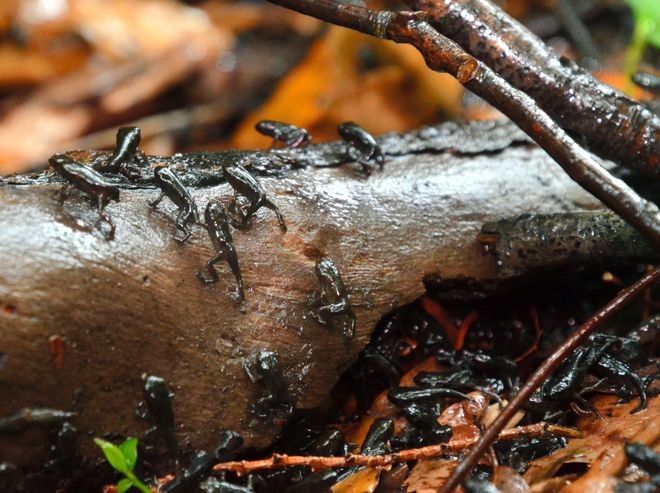 The start of juvenile toads’ ascent to the mountain top is confirmed for the first time this year on May 12 as rain falls from the morning. (Seiji Iwata)

DAZAIFU, Fukuoka Prefecture--At the foot of 829-meter Mount Homanzan on a recent morning, the participants started like runners in a marathon, swinging their thin limbs nimbly.

As they slowly moved up the mountain together, a careful observer could see that some of the younger ones still had their tails.

A myriad of brown juvenile toads marching up a sacred mountain toward the summit is a common local sight.

But why they do so remains a mystery.

Baby toads measuring as small as 1 centimeter long began their ascent on the morning of May 12 around ponds near Dazaifu Tenmangu shrine here.

“It takes 40 or so days for them to reach the mountain top from here,” said Rikuo Watanabe, 78, who lives in Dazaifu near the ponds. He was observing the tiny toads at the water’s edge.

The two pools are situated close to each other between the first and second stations of Homanzan. The young toads need to travel more than 2 kilometers along a hiking trail to reach the summit, which is 600 meters higher than the ponds.

Homanzan has long been revered as a mountain where deities fly down and attracted mountain ascetics during Japan’s medieval times. It has been designated by the central government as a national historic site.

As many hikers visit the mountain, sightings of hordes of tiny toads along the trail or around the summit are reported in the spring.

Watanabe is the first person who committed himself fully to looking into the toads’ custom. When he spotted a large black shadow over the surface of a pond in spring 2010, he was surprised to find it was made up of a bevy of tadpoles.

Discovering large toads descending the trail toward the ponds around February the following year brought to his mind the thought that “the toads at the mountain top may be the grown tadpoles born in and ascending from the pools.”

Watanabe explained his hypothesis to his mountaineer friends, who called it “interesting” and began keeping watch on the toads with him.

One of the observers, Akira Tanaka, 77, a professor emeritus of environmental informatics at Saga University, started his research in May 2016 and confirmed the juvenile toads’ start up the mountain on May 23 that year. He then traced their ascent up Homanzan each year.

Many challenges lie on the path to the summit.

Crossing a paved woodland road constitutes the most difficult part of the journey. Toads can be hit by cars if they try to cross the road at the wrong time.

Once they fall into ditches alongside it, the 30-cm-tall “perpendicular cliffs” hinder them from continuing the trip.

A snake species known as the tiger keelback, which feast on toads, seeks their prey at water spots and elsewhere beside the trail, and ants gang up on the young toads in groups.

Tanaka’s survey in 2016 showed the toads arrived at the top of Homanzan on June 25, a month after they started. Though they were initially less than 1-cm long, their body sizes had doubled by the end of their migration.

Tanaka and others have since been pursuing the bufos’ immigration every year.

Parent toads go down Homanzan to the ponds in January and February, when spring water temperatures drop to the lowest level, to lay eggs. The juvenile toads start on their trip for the summit in mid to late May.

Young toads move actively under rainy weather but stay still in the shade offered by rocks and fallen leaves on sunny days. For that reason, the length of time required for them to finish the march varies from 34 to 48 days.

That means the toads travel 50 to 70 meters a day on average. This year’s start is the earliest ever, and the toads are continuing their travels smoothly, in part, due to an increased number of rainy and cloudy days brought about by the earlier onset of rainy season.

It is common as a means to confirm that the toads at the summit are from the ponds at the base of the mountain to cut parts off their fingers and leave other marks for observational purposes.

But the group of monitors said they “do not want to go that far because we take pity on them” while shaking their heads. The observers are, though, confident about their theory.

In their research, people go to Homanzan almost every day to follow the toads' ascent to find when the fastest ones have arrived. When group members cannot visit there, they collect information from those who frequent the mountain and spot toads “around the fourth station” and elsewhere to pinpoint their current location.

As toads reportedly appear around the mountain top at the time they are expected to arrive there based on the past sightings, “there's no doubt that they come from the ponds.” At most, one in 100 toads are believed to finally arrive at the summit.

Why the toads head for the summit is shrouded in mystery.

A possible answer is that tiger keelbacks do not inhabit areas around the top of Homanzan. The group examined the toads with that assumption in mind, and contacted a resident living near another toad habitat in Fukuoka Prefecture to see if ascending mountains is a shared habit of the species.

The findings showed there are tiger keelbacks at the summit of Homanzan, and no stories of toads acting in the same way were uncovered.

A key factor likely behind the phenomenon identified through the process is their sense of smell, taking into account an academic thesis on toads’ olfactory sense.

“Hikers accidentally step on toads and their shoes may leave their scent on the trail, allowing tadpoles to retrace the smell,” said Tanaka.

Watanabe further stretched his imagination, saying that “the behavior may have started when ascetics were active on the peak,” although he admitted whether the speculation is the right way to unlock the mystery can be determined only when “toads themselves give us the answer.”

Mitsuru Kuramoto, 86, a herpetologist and head of the Kyushu Herpetological Society, who is a professor emeritus of the University of Teacher Education Fukuoka and knowledgeable about toads’ habits, said it is only natural that toads leave the water and head for mountains.

According to his accounts, toads usually spend time in forests and lay their eggs in ponds and other stagnant waters.

“It is no wonder that some toads reach the summit by chance,” said Kuramoto.

Still Kuramoto noted he has never heard about any cases of toads outside Homanzan arriving at mountain tops.

“It will be fascinating to find some kind of connection to romance in the phenomenon,” he said.

Six people including Watanabe set up a group to protect the toads on Homanzan in 2019. They are making efforts to preserve and monitor the species, such as temporarily placing stones for tadpoles to climb out of roadside ditches and introducing a sign calling for hikers not to step on them.

The toads on Homanzan were designated as a citizens’ heritage by Dazaifu city last year. If all goes well, they will arrive at the summit in mid-June this year.

“I would like people to see the toads while being careful of where they step,” Watanabe said.