Requests pour in for extension of COVID-19 state of emergency 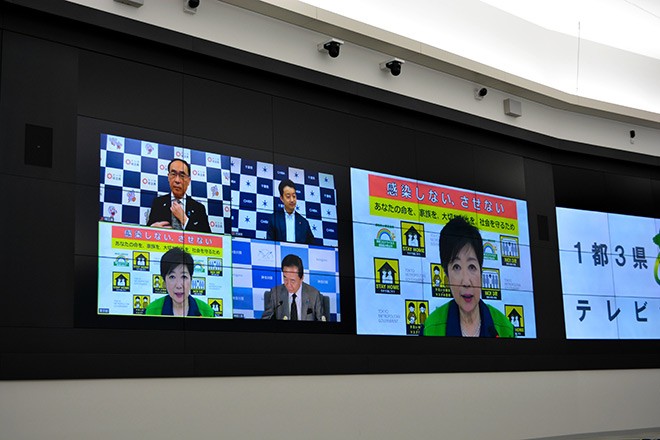 Tokyo Governor Yuriko Koike holds a video conference on May 26 with her counterparts from the neighboring prefectures of Kanagawa, Saitama and Chiba. (Yoshitaka Unezawa)

Health experts have joined expanding calls from around Japan for Prime Minister Yoshihide Suga to extend the COVID-19 state of emergency beyond the May 31 deadline, saying medical systems remain severely strained.

The central government plans to convene a task force meeting on May 28 to make a formal decision on whether to extend the state of emergency, which is currently in place for 10 prefectures

A May 27 meeting of Cabinet ministers dealing with the pandemic will decide on the length of the extension. One likely scenario is to continue the emergency declaration until June 20, the deadline now for recently listed Okinawa Prefecture.

That new deadline would come one month before the scheduled start of the Tokyo Olympics.

On May 26, Tokyo Governor Yuriko Koike held a video conference with her counterparts from the neighboring prefectures of Kanagawa, Saitama and Chiba and suggested the extension should be for a month or so.

While Tokyo is under the state of emergency, quasi-emergency measures are in place for the three other prefectures.

The four governors submitted a request with the central government for an extension of both measures.

The governors of Osaka, Kyoto and Hyogo prefectures in the Kansai region, as well as the leaders of Hokkaido, Hiroshima and Okayama prefectures made a similar request for an extension on May 26.

The three Kansai governors earlier in the day agreed to continue asking bars and restaurants to refrain from serving alcohol.

Fukuoka Prefecture asked for an extension on May 25.
Although Aichi Prefecture has not made a formal request to the central government, prefectural officials there also believe an extension is needed.

The number of new COVID-19 cases in Tokyo and Osaka has been declining in recent weeks, but the medical care situation remains precarious.

Tokyo is the only prefecture under the state of emergency where the hospital bed usage ratio is not at the most serious stage 4 level in excess of 50 percent.

The strain on health care systems is one reason experts dealing with the pandemic are recommending that the state of emergency and other anti-virus measures should be kept in place.

Health experts also pointed to the still high number of COVID-19 patients with serious symptoms as well as the number of fatalities.

But in other localities, the number remains high. Hokkaido had a per capita figure of 79.5, while the number for Okinawa was 87.2.

Eleven prefectures had numbers at the stage 4 level, leading experts on the government panel to say the health care situation was still very tight.

(This article was written by Jun Tabushi and Kai Ichino.)