No plans to be prime minister, Abe says. Few in LDP believe it 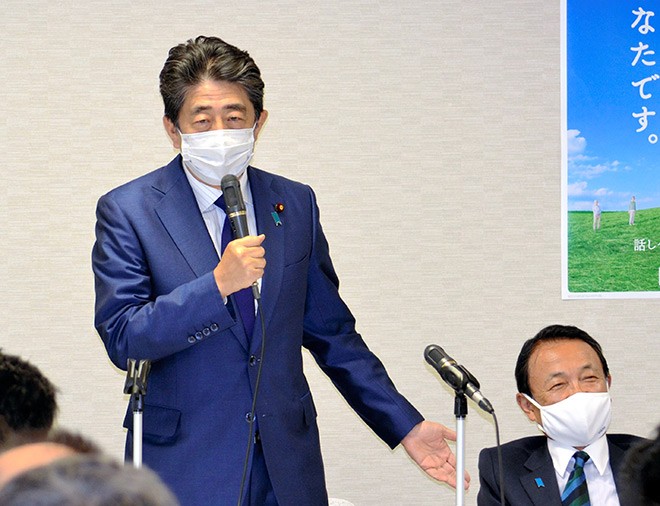 Former Prime Minister Shinzo Abe speaks at a gathering of lawmakers in the ruling Liberal Democratic Party on May 21. (Ayako Nakada)

Despite denials by Shinzo Abe about eyeing a third stint as prime minister, speculation that he'll be back in the job remains high in the ruling Liberal Democratic Party.

"I have not given that any consideration," Abe said, in an interview in the monthly magazine Hanada that went on sale May 26, while also expressing strong support for the administration headed by his successor, Prime Minister Yoshihide Suga.

“Not even one year has passed,” Abe said, commenting on the Suga Cabinet. “Any administration faces a spring and a winter. I believe we all have to make our best effort to support it.”

He expressed similar sentiments while appearing on a TV program broadcast on May 3, the national holiday Constitution Day.

Saying Suga should be allowed to continue as head of the LDP, Abe added, “If a (Lower House) election is held before (the LDP presidential election in autumn) and voters choose Prime Minister Suga, I believe it would be wrong for the party to then switch the party president.”

The strong support expressed by Abe has been welcome news for Suga, whose Cabinet approval ratings have tanked due mainly to public dissatisfaction at its handling of the novel coronavirus pandemic.

At the same time, Abe has not been totally pleased with what Suga has done while prime minister.

Though Suga took over while pledging to take up the policies his predecessor pushed, he quickly decided to hold off on seeking first-strike capabilities on enemy missile launch sites, a move that Abe strongly advocated.

Abe has also indicated that Suga should make greater use of government funds to deal with the pandemic.

And above all, Abe, who has long called for amending Japan's pacifist Constitution, is clearly displeased by the less than enthusiastic manner in which Suga has dealt with constitutional revision.

However, he did not mention Shigeru Ishiba, the former LDP secretary-general who ran in the past against Abe and Suga in LDP presidential elections and who has enjoyed high numbers in public opinion surveys regarding the next prime minister.

Also not mentioned by Abe was Taro Kono, the state minister in charge of administrative reform.

Abe's comments lead some in the LDP to believe he is trying to maintain enough party influence to choose the next party president.