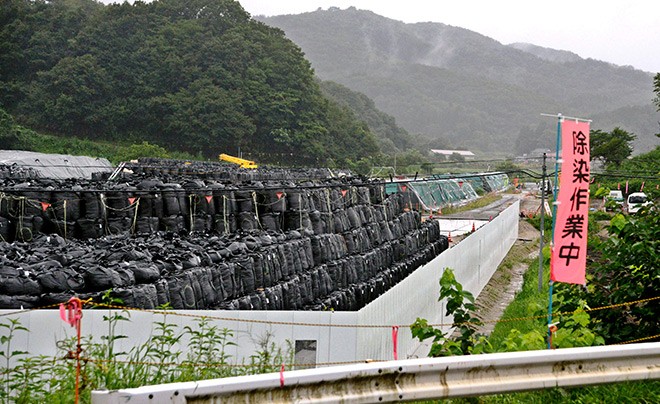 Many of the temporary storage sites for soil and waste contaminated by radiation from the crippled Fukushima No. 1 nuclear power plant are located in areas vulnerable to natural disasters, a government audit found.

The Board of Audit of Japan submitted an investigative report to the Diet on May 26 warning the central government to address the contaminated materials that would be in jeopardy in the event of disasters such as landslides and flooding caused by heavy rains, or tsunami.

The board studied the Environment Ministry’s reviews of the temporary storage sites for contaminated soil and designated radioactive waste from October 2019 to April 2020, and took issue with some of its assessments.

The results show 159 out of 170 sites in Fukushima Prefecture, where contaminated soil resulting from the accident at Tokyo Electric Power Co.’s Fukushima No. 1 nuclear plant is being temporarily stored, are within areas deemed vulnerable to landslides and flooding from heavy rain.

The ministry had surveyed locations but concluded that preventive measures were not necessary at 158 sites because the materials were fenced in or the contaminated soil was stored in bags and covered by liner sheets.

As for the remaining location, the ministry moved the contaminated soil to an intermediary storage site.

In nine prefectures including Fukushima, 130 of 379 locations that store contaminated waste are in areas expected to be flooded or hit by landslide in the event of a disaster.

For 117 locations, the ministry concluded it is unnecessary to take preventive measures because the waste is stored inside buildings.

But for 13 locations, the ministry said discussion is needed over the necessity of taking preventative measures.

The board said the ministry’s reviews did not include a check of whether each site is located in an area considered vulnerable to tsunami or flooding. The ministry had reasoned that embankments or other obstacles are either in place or under construction, and that the need to take measures against a potential tsunami is low and any impact from a reservoir collapsing would be limited.

The board said the ministry needs to consider residents’ concerns about the potential of a leak of contaminated materials, check if the areas are vulnerable to disasters and take preventive measures.

The ministry responded to the audit by defending that it “prioritized quickly securing storage sites at the time and did not have time to check the sites against a hazard map.”

A representative of the Fukushima prefectural government admitted some mistakes were made.

“We knew the locations of storage sites but failed to think about disaster-prevention measures,” the representative said.