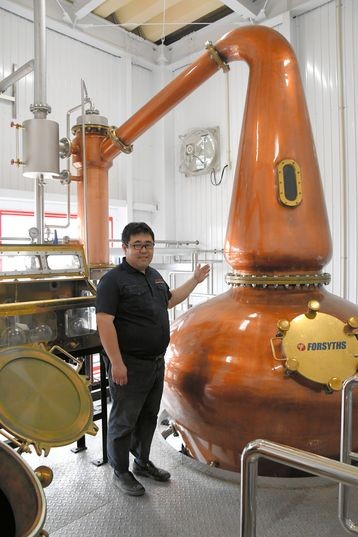 Hiroyuki Doda, the president of a joint distillery and a director at personal seal maker and seller Otani, poses on May 7 in Niigata’s Konan Ward with a Scottish still bought by his distillery. (Tomoki Miyasaka)

Niigata is home to the most sake brewers of all Japan’s prefectures, but as consumption trends change, many traditionally sound businesses are turning to a beverage originally from halfway around the world amid strong demand.

At a traditional Japanese brewery in a region famous for its “nihonshu” sake, four deep black sherry casks--quite the unusual sight--were in full view recently at Hakkaisan Brewery Co. in Minami-Uonuma, Niigata Prefecture.

The brewery is famous for its Hakkaisan nihonshu rice wine brand and it will mark its 100th anniversary next year. It boasts the second-highest sales figures among all the sake breweries in the prefecture, but it is nonetheless pivoting to making whisky a key part of its future.

“I believe whisky will become a core product for our business 10 to 20 years from now,” said Jiro Nagumo, 62, president of Hakkaisan Brewery.

Mamoru Tsuchiya, head of the Tokyo-based Japan Whisky Research Center, said strong whisky sales can be attributed to a shortage of unblended whisky in Japan.

The growing popularity of mixed drinks such as highballs, among other factors, have resulted in major distillers being unable to meet demand for prolonged periods of time.

“Manufacturers of sake, shochu and other products are entering the whisky business,” Tsuchiya said.

The shrinking sake market is one of the main reasons behind Hakkaisan Brewery tapping into the whisky business in 2017.

Hakkaisan Brewery’s own sake shipments dropped by 10 percent from its peak period.

To make up for that loss, it began to diversify, turning to whisky and a wider range of products, including craft beer, shochu, and “amazake,” a traditional sweet beverage with low or no alcohol content.

Nagumo said distilling whisky is especially appealing because “the ingredients and alcoholic content can be freely determined, and the taste and flavor can dramatically change depending on the length of maturing periods.”

Another attractive aspect is that the government imposes fewer regulations on whisky distillation than shochu or sake production.

Hakkaisan Brewery obtained its whisky making license in 2016. As a rice wine brewery, it chose sake rice as the main ingredient for its whisky in a bid to stand out. But it took a few tries to get the recipe right.

At a sampling session last year, the finished three-year-old whisky tasted “bitter and harsh--so terrible that I thought I had no choice but to throw it away,” Nagumo said.

But the quality drastically improved this year. It has a much milder acridity and boasts a pleasant aroma.

The brewery also began distilling whisky from barley in Niseko, Hokkaido, in March. It is looking to produce more than 90 kiloliters of whisky and gin annually to win over international tourists expected to visit there once the novel coronavirus pandemic ends.

Though when exactly the whisky made in Minami-Uonuma will be marketed is unclear, the brewery is planning to eventually ship the new product to consumers both in and outside Japan.

While the sake business is going through tough times, Niigata has meanwhile enjoyed something of a mini whisky-production boom.

According to the Niigata tax office, six businesses in Niigata Prefecture hold whisky distilling licenses as of March--five of which have only had theirs since 2016.

One of the six licensed businesses, Niigata Beer, located in Niigata’s Nishikan Ward, has been distilling its Koshi-no Shinobu whisky since 2017. It ships about 150,000 bottles under its label each year.

Whisky accounts for about 60 percent of Niigata Beer’s total sales of 570 million yen ($5.23 million). Most of the bottles are exported to Europe, the United States and China.

Sake brewers are not the only ones in Niigata turning to whisky to bolster business.

Companies in Niigata Prefecture, including Otani, a major “hanko” personal seal manufacturer in Niigata’s Konan Ward, invested a total of 250 million yen in a distillery to begin whisky production in March.

The small distillery is one of the prefecture’s six licensed whisky distillers.

Otani decided to expand into the whisky market due to the difficult situation its main business is facing.

“As the number of Japanese children is on the decline, we cannot continue business only with seals bought to coincide with coming-of-age ceremonies and other ceremonial occasions,” said Hiroyuki Doda, 45, the president of the distillery and a director at Otani.

Doda said they landed on selling Japanese whisky since its popularity with consumers has spread both in Japan and abroad.

The completed whisky bottles are expected to be delivered from 2024 after the three-year maturing period. The distillery is seeking cask owners so it can operate on deposits from them and other funds.

Doda said his company signed a contract with an agricultural corporation in Niigata Prefecture to distill genuine Niigata-made whisky with grain cultured in the prefecture. The distillation is to start around this summer.

“Many people must want to try whisky distilled in the sake-producing area of Niigata,” Doda said.

Yasuyuki Kishi, an associate professor of business management at Niigata University’s Sakeology Center, has high expectations for the prospects of whisky brands from Niigata Prefecture.

“Food products from the prefecture have strong brand power,” Kishi noted. “The belief has taken root nationwide that Niigata has sake, rice and other tasty foodstuffs.”

Kishi has some advice for how smaller distilleries can stand out.

“Adding twists, such as maturing bottles in ‘yukimuro’ snow storehouses for added value, as well as promoting new styles of drinks, like highballs, will be essential.”