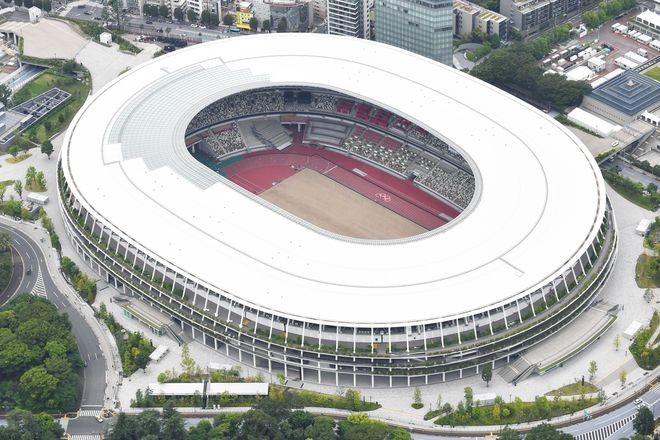 The National Stadium, the site of the Opening and Closing Olympic ceremonies, in Tokyo’s Shinjuku Ward on May 16 (Asahi Shimbun file photo)

The Japan Sports Agency is under fire for purchasing air cleaning equipment for the Tokyo Olympics that has no proven effectiveness in reducing airborne viruses.

The agency bought the equipment in the hope that its use at meeting rooms and other areas in the National Stadium in Tokyo, where the Opening and Closing Olympic ceremonies are due to be held, would help keep staff members and others safe from novel coronavirus infection.

But experts took issue with the JSA because the purchase could be taken to show the technology has the full endorsement of the government.

Manufacturers of such appliances are not permitted under the drug and medical equipment law to promote such devices as helpful in combating viral infections.

“The purchase presents a problem because it sounds as if the technology has obtained the full endorsement of the government,” said Narumi Hori, a nurse who offers consultation services to stop infectious diseases from spreading. “I would advise the agency to take appropriate steps without being deceived by suppliers’ advertisements.”

Hori accused manufacturers of playing on the public's fears about becoming infected.

“They are spurring consumers’ fears,” she said. “They are only adding to the burden on people and society, and as such, their behavior is entirely inappropriate.”

The agency said it initially considered purchasing robotic anti-virus equipment that uses artificial intelligence (AI) to purify the air, but dropped the plan in light of objections from the health ministry.

The ministry’s only recommended method to keep airborne viruses at bay is “frequent ventilation.”

However, it went ahead with the purchase of atmospheric purifiers billed as having the ability to disinfect the air under the rationale that “ventilating venues as much as possible” presented a viable option.

The agency allocated 2 billion yen ($18.3 million) in the third supplementary budget last fiscal year for “steps against the novel coronavirus infection at the National Stadium and elsewhere.”

The “air disinfection” technology was included in the funding plan.

The budget is aimed partly to ensure there will be a sufficient number of air cleaners at the National Stadium to keep people safe. The devices cost several hundreds of thousands of yen in total.