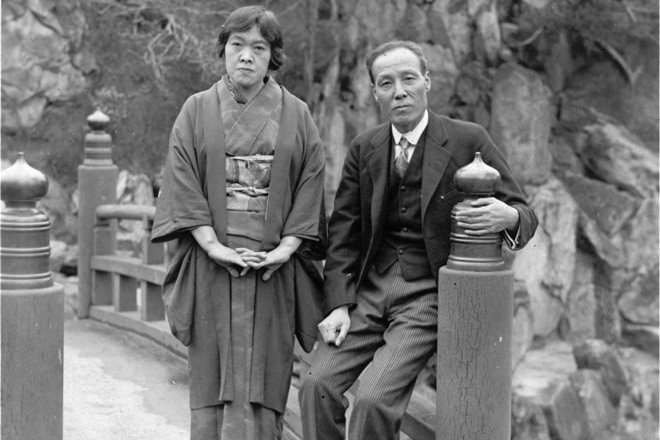 Writer and poet Akiko Yosano (1878-1942) wrote about her dread of the raging Spanish Flu in one of her publications.

She received multiple vaccinations, strictly followed her gargling regimen and made her school-age children stay at home. But for all the precautions she took, she worried about whether she would still be healthy the next day.

Yosano was a highly cultured person, best known as the author of “Midaregami” (Tangled Hair), a seminal collection of tanka verse published in 1901.

Her husband, Tekkan Yosano (1873-1935), is also well known. But he did not produce as many celebrated literary works as Akiko did.

I read somewhere that he had extramarital liaisons with a number of women. How did Akiko take that?

“For Akiko, Tekkan was her partner in a ‘three-legged race’ in life,” noted Akiho Morishita, 49, curator at the Yosano Akiko Museum in her native city of Sakai in Osaka Prefecture.

Tekkan was initially Akiko’s respected literary mentor. They went ahead to have 11 children, whom they raised together. Morishita believes Akiko had no intention of divorcing him.

“He was the intellectual type who used his wealth of literary knowledge to mentally compose sophisticated verse,” Morishita said. “That came across as old-fashioned and stuffy to younger poets.”

In contrast, Akiko would spontaneously express her emotions in her verse. Her literary fame lasted throughout her life.

She also won acclaim for her critical commentaries, championing women’s independence and other issues.

Tekkan began to increasingly focus on his role as a “backstage hand” for his wife over the years.

He bathed their younger children, wrote letters on his wife’s behalf and provided her with summaries of the contents of many newspapers as well as magazines ordered from France.

His managerial aptitude was apparently quite high.

“Hakuo-shu,” the final collection of Akiko’s verse compiled in 1942 after her death, contains this piece that goes to the effect: “With the two of us trying together to realize an eternal spring, I think I am still at a halfway point.”

I try to imagine the eternal spring this couple reached through their eventful marriage.

May 29 is the anniversary of Akiko’s death, called “Hakuo-ki” (White cherry blossom anniversary).