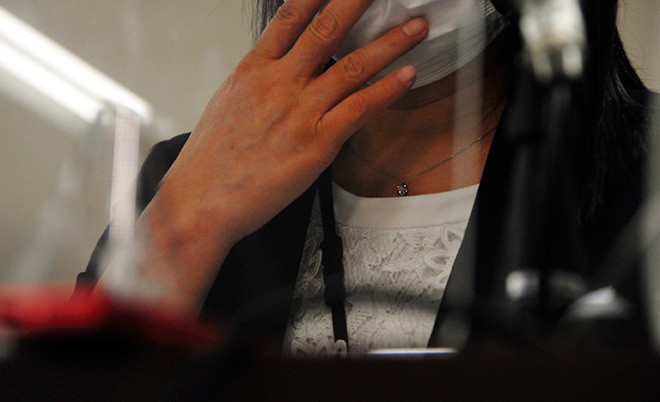 An economy ministry employee who sued the central government over restricting her bathroom use speaks at a news conference after the Tokyo High Court’s ruling on May 27. (Shunsuke Abe)

The Tokyo High Court on May 27 said the economy ministry’s decision to prohibit a transgender employee from using the women’s bathroom is not illegal, reversing a lower court decision.

“It is difficult to admit that (the ministry) failed to perform its duties,” Junichi Kitazawa, the presiding judge, said about the ministry’s office bathroom restriction.

The plaintiff is a ministry employee in her 50s. She is registered as a male in the family registry but lives as a female due to gender dysphoria.

She had informed the ministry about her gender dysphoria in 2009.

The ministry allowed her to come to work in women’s clothing and work as a woman starting from 2010. But the plaintiff was told to use a women’s bathroom two floors or more away from where she works because she is still registered as a male in the family registry.

The high court meanwhile ordered 110,000 yen ($1,000) in damages to be paid to the plaintiff over inappropriate remarks made by her boss.

That came as a significant loss to the plaintiff, given that the lower court had ordered a significantly higher payment of 1.32 million yen in damages.

After the ruling, a lawyer for the plaintiff called it an “extremely awful decision” given that there is so much prominent discourse “on ways to protect the rights of minorities,” and added that the plaintiff is expected to appeal.

“It feels like (the court) just overturned a table,” the plaintiff said, choking up as she spoke.

The ruling “did not take my individual situation into account, like I have received hormone treatments for many years,” she said.

“(Transgender people) are sometimes not treated properly in the workplace. I hope it becomes commonplace that people can work based on their own gender identification.”

The plaintiff had launched a suit against the central government in 2015, demanding compensation for damages over how she was treated by her employer.

The Tokyo District Court ruled in December 2019 that the bathroom restriction was illegal and ordered the government to pay her 1.32 million yen.

Both the plaintiff and the government appealed to the high court.

“To live a social life with a gender based on a person’s own gender identity is a legally protected interest,” the high court said in its ruling.

However, it also said the ministry’s handling of gender dysphoria is “different in terms of circumstances from that of private companies, which can easily take progressive measures.”

The ruling addressed when the plaintiff had informed the ministry about gender dysphoria in 2009 there were “no rules and reference cases at government offices.”

The ruling said how to treat a transgender person who does not change their gender in the family registry was an "unknown factor" for the ministry.

The ruling cited the fact that the ministry listened to the plaintiff and the plaintiff’s primary doctor, and had twice held meetings to listen to other employees’ opinions before imposing the bathroom restriction.

The ruling then assessed that the ministry “positively discussed (the issue) and coordinated to make the decision.”

It also pointed out that the ministry continued to impose the restriction “in order to meet its obligations to create a proper work environment for all employees.”

The court ultimately rejected the plaintiff’s demand to end the ban on her using the women’s bathroom.

But the high court upheld that an inappropriate remark by her boss was illegal and ordered the government to pay damages.

The plaintiff had stated that her boss had told her, “Why don’t you go back to being a man if you don’t undergo sex reassignment surgery.”

The plaintiff has not undergone sex reassignment surgery, which is a requirement to change one’s gender in the family registry, due to health reasons.