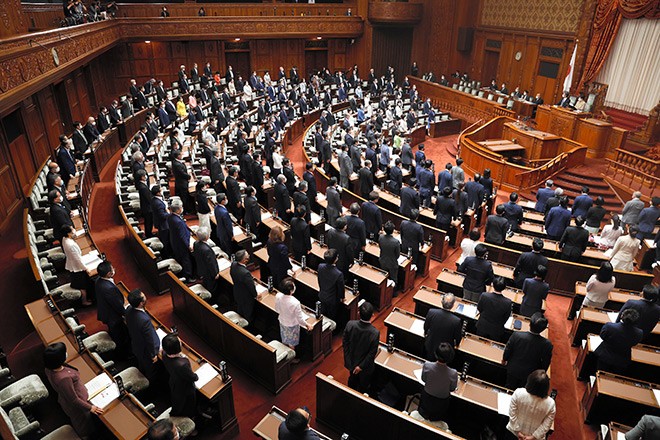 A bill to ban pedophile teachers from getting licensed again passes at an Upper House plenary session on May 28. (Koichi Ueda)

A bill to stop pedophile teachers from being licensed again and putting other children at risk in the classroom passed in an Upper House plenary session on May 28.

Under the new law, prefectural education boards will be authorized to refuse reissuing teaching credentials to those dismissed for committing obscene acts against children.

The law is expected to take effect within a year after promulgation.

The existing law allows pedophile teachers to apply to reacquire their teaching credentials after three years have passed since they were revoked.

Under the new law, prefectural education boards will seek opinions from a panel of experts on the appropriateness of reissuing a teaching credential to a previously dismissed teacher.

The education ministry will decide on the ways to organize and operate a panel of experts in an ordinance.

A team of lawmakers who belong to the ruling Liberal Democratic Party and its junior coalition partner, Komeito, initiated the legislation.

Teachers who were dismissed and had their teaching credentials revoked after committing obscene acts against children have been rehired by a different education board with their certification reissued and then repeated offenses against children.

Parents and experts have urged the government to fix an unbelievably lax system that allows automatic reissuance of teaching credentials that puts vulnerable children in danger of sexual predators.

The working team was established in March after the ministry gave up on a plan to revise the Education Personnel Certification Law in the current Diet session.

Opposition lawmakers have supported the bill. The working team submitted the bill to the Diet on May 21.