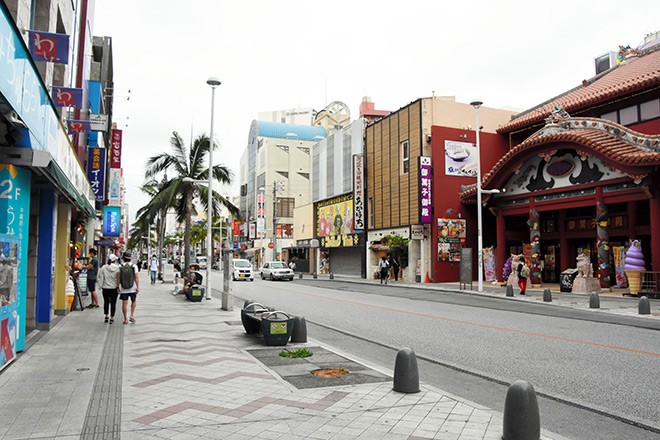 The Kokusai-dori main street, a popular tourist spot in Naha, Okinawa Prefecture, is mostly deserted on May 21. (Maho Fukui)

Okinawa Prefecture confirmed 313 new COVID-19 cases on May 28, exceeding the previous daily high of 302 recorded on May 26.

The southernmost prefecture’s latest daily count topped 300 for the second time since May 26 and raised the total number of coronavirus infections in the prefecture to 16,303.

The number of new COVID-19 cases per 100,000 people in Okinawa Prefecture over the most recent week hit 102.55, the highest figure ever recorded in any of the nation’s 47 prefectures, according to the Okinawa prefectural government.

The occupancy rate of hospital beds for COVID-19 patients also remains high in the prefecture, at 94.5 percent.

Tokyo reported 614 new infections on May 28, down 35 from a week ago, according to metropolitan government officials.

The latest tally brought the daily average for the week in the capital through May 28 to 580, or 86 percent of the figure for the preceding week.

The average number of diagnostic tests conducted in Tokyo over the three days through May 27 was 8,625.

Six new deaths from the coronavirus were confirmed in the capital on May 28.

The number of serious cases in the capital requiring ventilators or extracorporeal membrane oxygenation, also known as an ECMO lung bypass machine, rose by one from the previous day to 70 on May 28, the officials said.

The northernmost main island’s daily tally was down from the 570 cases reported the previous day and dipped below its record high of 727 marked on May 21.

Hokkaido confirmed 17 new deaths from the virus, including 13 in the capital of Sapporo, on May 28, exceeding the previous high of 16 recorded on Dec. 9, 2020.

Osaka Prefecture reported 290 new infections on May 28, bringing the prefecture’s accumulated number of COVID-19 cases to 99,275.