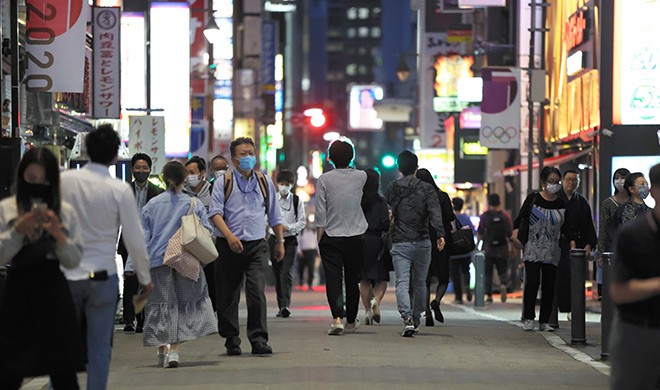 An analysis of pedestrian traffic in Tokyo suggests another uptick in COVID-19 cases may be just around the corner.

The study by The Asahi Shimbun was based on the flow of human traffic aggregated by Tokyo-based Agoop Corp., a Softbank Group subsidiary that tracks people’s movements through GPS data on their mobile phones.

The Asahi used data from Agoop compiled between April 1, 2020, and May 25, 2021, to calculate the average population per week around 14 rail hubs in the capital.

Accepted wisdom to date suggests that if fewer people are on the streets, fresh cases of COVID-19 will show signs of dropping about two weeks later.

However, the Agoop data points to a subsequent increase in the number of people going out.

While the number of new COVID-19 cases has been falling since the week from April 28, the latest figures indicate another uptick may be possible soon.

“A key lesson we've learned so far is the need to maintain restraints on people's movement during the period when new infection cases start to decline so as to further reduce new cases,” noted Koji Wada, a professor of public health at the Otawara, Tochigi Prefecture-based International University of Health and Welfare. “But gaining the understanding of the public will not be possible unless data is presented about the number of vaccinations given and an exit strategy is also clearly presented.”

A comparison of total human traffic flow for four-week periods found a 78-percent reduction between April 28 and May 25 compared with the immediate preceding four-week period between March 31 and April 27.