Those with Olympic links able to bypass self-quarantine 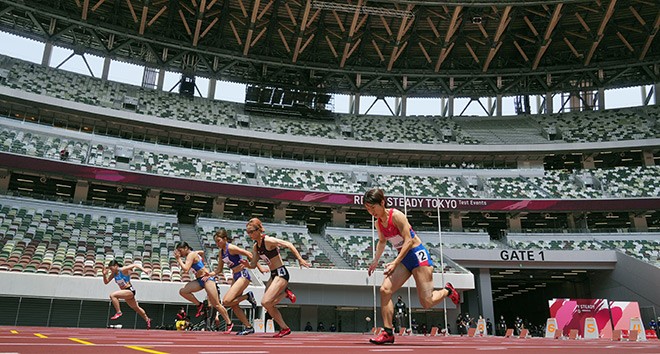 Athletes take part in a test track and field event held at Tokyo's National Stadium on May 9 without fans in the stands. (Ryo Ikeda)

More than 1,400 athletes, officials and other key personnel associated with the Olympic Games being staged in Tokyo from July were exempted from self-isolating after arriving in Japan.

The special treatment since April is in stark contrast to strict government policy implemented after the novel coronavirus pandemic struck early last year.

Foreign nationals, in principle, remain prohibited from entering Japan, now in the grip of a fourth wave of COVID-19 cases.

And even Japanese nationals living overseas and spouses of permanent residents are only permitted to enter under special circumstances. In all cases, those individuals are required to self-quarantine for two weeks.

The government admitted May 28 that it was giving preferential treatment to Olympic athletes, coaches, referees and executives connected with the sports events after Akira Nagatsuma, a member of the opposition Constitutional Democratic Party of Japan, raised the issue during a session of the Lower House Health, Labor and Welfare Committee.

The government said that 1,649 foreign nationals connected with the Olympics had entered Japan since April, of whom 1,432 were exempted from the self-quarantine requirement.

Those connected with the Olympics and Paralympics were exempted from the self-quarantine restriction as long as they repeatedly take polymerase chain reaction tests.

Athletes are allowed, in principle, to take up training immediately after their arrival.

Between April 1 and May 16, government officials said 1,649 individuals connected with the Olympics had arrived from 80 or so nations and regions.

Of that number, 24 were from India, where a virulent mutant strain of the novel coronavirus is now making its presence felt in Japan. Of the 14 who arrived in May, all had shortened self-quarantine periods.

Nagatsuma wanted to know why the principle of self-quarantine was waived for those connected with the Olympics.

According to officials with the Cabinet Secretariat and Japan Sports Agency, included in the number of foreign arrivals are athletes who took part in pre-Olympic test events in track and field, diving and volleyball held in May.

Others who arrived were individuals with the Olympic Broadcasting Services and technicians preparing for the upcoming Games. For such individuals, enforcing the self-quarantine requirement would have led to not meeting their work deadlines, officials said.

(This article was written by Suguru Takizawa and Takeshi Teruya.)