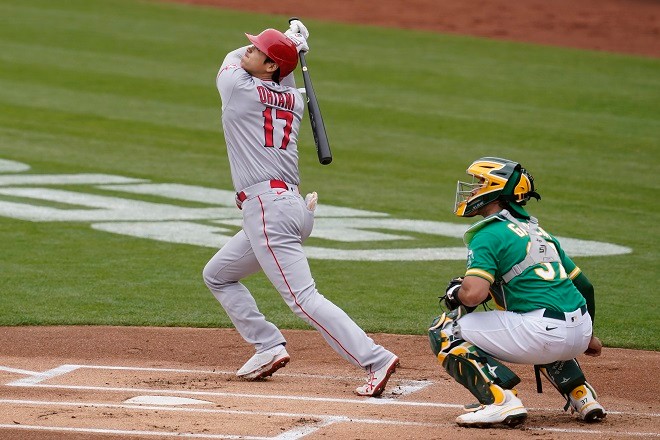 Cobb (3-2) allowed three hits and walked two facing Oakland for the first time since 2018 while with Baltimore. He improved to 5-3 over 11 career starts against the A's.

Los Angeles stopped a two-game skid after dropping the first two games of the series and snapped Oakland's three-game winning streak. Ohtani was the losing pitcher Friday night despite holding the A's to three hits in six-plus innings.

The Angels went ahead on David Fletcher's grounder in the fifth, when the Angels scored four unearned runs following one of three wild pitches by Frankie Montas. Ohtani's single made it 3-0.

Kean Wong's two-out double in the sixth chased Montas (5-5), who allowed six hits, struck out seven and walked one.

The Angels are 22-8 when scoring four or more runs and avoided matching the club’s season-low at eight games below .500.

Trout is attending the Angels home games for now as he recovers from a strained right calf that he injured last week and will keep the three-time AL MVP out six to eight weeks.

“He’s a great cheerleader. After we win he’s in the line all the time,” Maddon said. “He attends the meetings, he’s doing everything right. Our goal is to stay in the hunt somehow until he returns. Believe me, a lot of time spent mentally trying to understand how we maintain with this group here and Houston and a lot of the good teams that we’re going to be playing.”

Angels: C Max Stassi (concussion) and RHP Chris Rodriguez (inflammation in his pitching shoulder) each made rehab appearances Friday with Triple-A Salt Lake. Stassi was 2 for 3 with a double and RBI while catching five innings. Rodriguez started and pitched one scoreless inning with a walk.

Athletics: CF Ramón Laureano missed his second straight game with tightness in his right groin. “I would say he's had some improvement, not enough to where we're comfortable running him out there right now. Who knows, it may be another day, I'm not sure," manager Bob Melvin said. “Literally a day-to-day situation. This early in the season, how much he means to the team, we don't want to put him in a position to go out there and re-injure this thing, especially at the pace that he plays. We're going to be careful with him.”

Angels LHP José Quintana (0-3, 7.92 ERA), a 13-game winner in both 2018 and ’19 with the Cubs and seeking his first victory in two seasons, pitches Sunday after being pushed back a day when Ohatani was scratched Thursday because of a delay getting to the ballpark.