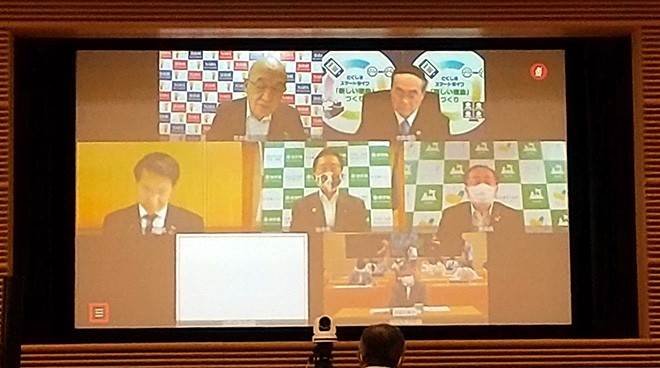 Prefectural governors discuss their emergency proposals for measures against the novel coronavirus during an online meeting May 29. (Harufumi Mori)

Prefectural governors across Japan made an impassioned plea to the government to enhance steps against a coronavirus variant from India and to help speed up the vaccine rollout.

As an immediate step, they called for strengthened checks at airports to keep the virus from entering Japan.

Their proposals were compiled at an online meeting of the association of governors held May 29 in response to the government’s announcement the day before that the state of emergency for Tokyo and eight other prefectures will be extended beyond May 31 until June 20.

At the meeting attended by 43 governors, many expressed concerns about the Indian variant, which is deemed to be more contagious than a variant first detected in Britain.

The variant from Britain is now the dominant strain spreading in Japan, which is in the grip of a fourth wave of infections. The strain was first detected in Japan late last year.

In calling for more rigorous measures at airports, Tottori Governor Shinji Hirai said the government’s efforts to keep the virus from Britain at bay had failed miserably.

Toshihito Kumagai, the governor of Chiba Prefecture where Narita Airport is located, also acknowledged that the virus has made inroads into Japan despite airport checks aimed at detecting incoming affected passengers.

Twenty-nine cases of the Indian variant had been detected in Japan as of May 24, the health ministry said.

Among other proposals, the governors called on the government to keep track of the whereabouts of new arrivals during the two-week period they are obliged to provide frequent updates on the state of their health.

They also urged it to share information on suspected infection cases and for local governments to receive assistance in identifying variants at regional labs, just like central government-affiliated facilities.

With regard to vaccines, the governors urged the government to swiftly provide information on the schedules of supplies in July and beyond, including how many doses will be provided and for which vaccine.

They also suggested that essential workers, such as the police and staff at facilities for people with disabilities and childcare centers, to be vaccinated ahead of the general public.

To date, the authorities have placed priority on inoculating health care workers and those aged 65 or older.

A number of governors proposed that jabs be offered at company offices and universities to speed up inoculations of those aged 64 or younger.

“The government needs to work on a program to allow people to get vaccinated at their office or university,” said Osaka Governor Hirofumi Yoshimura, noting that many large companies and universities are located in his prefecture.