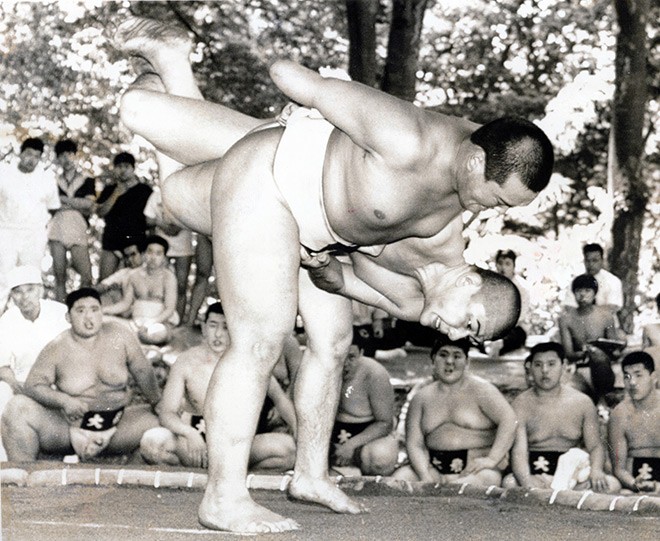 Yoshiki Fuse, front, throws his opponent to the ring floor during a sumo match at the Inter-High School Athletic Meet in 1991. (Asahi Shimbun file photo)

Ozeki Terunofuji is making a historic comeback, rebounding from injuries, disease and a plunge to sumo’s second-lowest division to stand one step from promotion to yokozuna.

The 29-year-old Mongolian credits his recent success to an amateur who inspired him: Yoshiki Fuse, 47, who was active in the 1990s as a one-armed sumo wrestler.

Terunofuji is often reluctant to answer questions about his personal life. But before the Summer Grand Sumo Tournament in May, the ozeki revealed the source of inspiration he discovered on YouTube.

“Even with his condition, he was wrestling with all his strength. And I felt motivated,” Terunofuji said about a documentary show that originally aired on TV.

The documentary was about Fuse, who lost his right arm below his elbow after his arm was caught in an agricultural-use cutter when he was a second-grader.

Despite the odds, he started sumo after he moved on to Ono Agricultural High School in Hokkaido. Fuse was a quarterfinalist in the individual division at the Inter-High School Athletic Meet when he was a third-year student. He also served as captain of the school’s sumo club.

Fuse currently teaches at a high school in Tokyo. He was delighted to hear what Terunofuji said about him.

“I’m glad he watched my younger days,” he said.

Although Fuse was under the spotlight for his performance during his high school years, he found himself struggling after he enrolled at Takushoku University.

It was not until he was a third-year student when he started winning matches. Sumo training sessions also became dramatically harder.

But he learned something from the setback. As he continued to keep up with the difficult training, Fuse overcame the handicap of being one-armed and learned how to use his right arm in sumo bouts.

Naturally, he can neither grab the opponent's mawashi belt nor use open-hand strikes. Still, he became able to tackle his opponent using his upper arm above the elbow.

“You can do anything if you try. I learned that from sumo,” Fuse said.

He once overheard the manager of an opposing team angrily saying that it was shameful for his student to lose to a one-armed competitor. In addition, many of Fuse’s opponents would try to take him down from his right side, thinking his right arm was his blind spot.

“Sumo is not a sport in which you only use your arms and feet,” Fuse said. “It’s more important to know how to use your body.”

Terunofuji, who was first promoted to ozeki in 2015, was relegated to the sport’s second-lowest jonidan division due to knee injuries.

After considering retirement many times, he has regained his winning form.

Terunofuji captured the Spring Grand Sumo Tournament in March, securing his return to ozeki after three and a half years, a feat described as “the greatest comeback in the history of sumo.”

Terunofuji went on to clinch his fourth career championship in the May tournament and is expected to be promoted to the sport’s highest rank if he wins the Nagoya Grand Sumo Tournament in July.

“He came back as an ozeki many times stronger than before,” Fuse said.

Fuse returned to sumo wrestling after he turned 40, taking part in competitions for corporate work teams as an amateur while serving as an adviser to a sumo club at his school.

When he wins, he still receives remarkably loud cheers.

“It is meaningful to compete in sumo if I can show people that even I can fight,” Fuse said. “I was also inspired to see how the ozeki made his comeback. Everyone has infinite possibilities.”