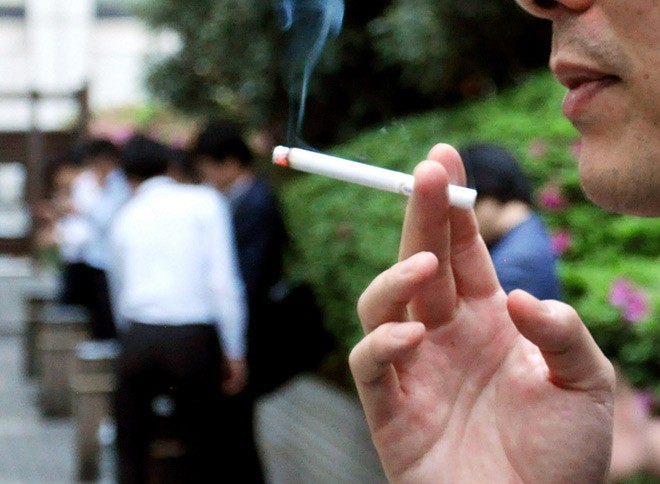 Despite the heightened risk of catching a potentially fatal respiratory disease, smokers who are puffing more outnumber those who are smoking less during the COVID-19 pandemic, according to a National Cancer Center survey.

The trend for the increased tobacco use is related to the new normal of teleworking or staying at home, according to the survey, which was released on May 31 to coincide with World No Tobacco Day, an initiative by the World Health Organization.

The survey also showed that smokers largely underestimate their risk of catching the novel coronavirus in smoking areas and developing serious COVID-19 symptoms compared with the understanding of the risks by their nonsmoking counterparts.

The online survey was conducted in March, with 2,000 men and women responding. Half of them were smokers.

According to the results, 18 percent of the smokers said they were smoking more than during the pre-pandemic days, while 11 percent answered the opposite.

One percent said they quit smoking after the public health crisis hit. The rest of the smoking respondents said their habits remained the same as before.

Of the 180 smokers who are smoking more, 49 percent, the largest share, cited increased stress as main reason for doing so, while 34 percent pointed to the lack of no-smoking rules at home in contrast to the policies of their offices.

Ten percent replied that they do not need to worry about how others view their smoking habits while at home.

The survey also found that 124 respondents were either smoking less or had kicked the habit.

Thirty percent of them cited reduced opportunities to smoke as a result of a paucity of drinking or dinner parties, while 19 percent said they wanted to protect their families from secondhand smoke.

According to the survey, 25 percent replied that they want to quit smoking, a figure almost the same as in a survey taken before the pandemic.

The study also showed a disturbing gap in the understanding of the correlation between smoking and chances of developing serious COVID-19 symptoms between smokers and nonsmokers.

Asked if they think smokers tend to develop serious cases, 59 percent of nonsmokers answered they do, but the ratio of smokers who thought so was 37 percent.

The survey also found that 63 percent of nonsmokers considered smoking areas as potential sources of spreading the novel coronavirus, while only 39 percent of smokers felt similarly.

Smokers were evenly split about possible forced closures or bans on smoking areas, with 30 percent in favor and 31 percent in opposition.

But 64 percent of nonsmokers supported such anti-smoking measures, and only 4 percent were against them.

Fumihiko Wakao, director of the Center for Cancer Control and Information Services with the National Cancer Center, noted that smokers tend to underestimate the dangers related to the novel coronavirus.

“The risk of developing serious COVID-19 cases is higher for smokers, compared with nonsmokers,” he said. “The risk of becoming infected with the virus at a smoking area where smokers gather close together without wearing masks is also high. Smokers are more likely to take things in a way that is convenient for them.”

Wakao said although other factors contribute to the severity of COVID-19 cases, patients can help alleviate the situation by quitting smoking.

Studies in Japan showed that smoking is responsible for the cancers in 30 percent of male patients and 5 percent in female patients.

The ratio of smokers in Japan has shown signs of bottoming out in recent years after a steady decline over the past 50 years or so.

The government has set a goal of reducing the ratio of smokers to 12 percent of the adult population by fiscal 2022.