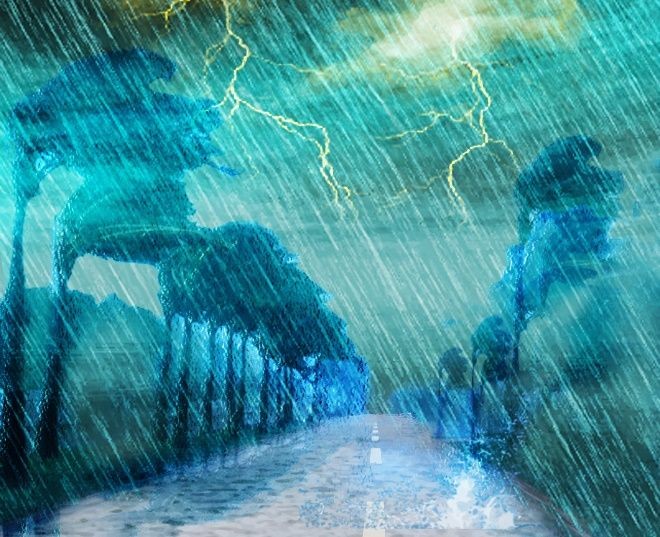 gust of wind
pecking at the stars
the flamingos
--Francoise Maurice (Draguignan, France)

by storm
careless in the air
the wind travels in a breeze
--Germina Melius (Castries, Saint Lucia)

The haikuist didn’t know which way to turn. Pippa Phillips’ haiku was halved with a dash to emphasize its start and finish. Slobodan Pupovac witnessed the sky split from the sea.

on the horizon
separation
blue--blue

Franjo Ordanic lay low when turbulent cold winds from Croatia blew at speeds up to 200 kph along the eastern coast of the Adriatic Sea. Dottie Piet played a small bagpipe, a French musical wind instrument, in Tulsa, Oklahoma.

in full bloom
the apple trees hum
a sweet musette

P.H. Fischer wondered what the neighbors were up to in Vancouver. Sherry Grant moves poetry around the world in her role as an international communities outreach officer for the New Zealand Poetry Society. Masumi Orihara marveled at the lifestyles of former television talents.

quarantine
a breeze floats petals
over the hedge

blowing kisses
over another continent
newly-weds

Fischer escorted his wife “to the bus stop before work. As the bus came… we had a good laugh.” Elizabeth Moura teared up in East Taunton, Massachusetts. Satoru Kanematsu spied on a private conversation for two in Nagoya. Arvinder Kaur’s relationship was unmasked in Chandigarh, India.

forgetting--
we kiss
our masks

Tete a tete
no social distance
for lovebirds

social distancing
no longer hiding the reality
of our marriage

Vernal Falls
above monochrome rocks
a rainbow in the mist

waiting for an old friend
a lighthouse beacon
pierces the fog

Goran Gatalica spotted a buoy while beachcombing the Adriatic Sea.

Xenia Tran saw a rescue team converge in gale-swept Scotland. Cruise ships were hard-hit by the fear of catching COVID-19 onboard. Pitt Buerken saw one get hit by high waves with long overhanging crests as it put out to sea.

blown off-course
the coastguard gathers
at the boat slip

Roberta Beach Jacobson wrote this one-liner while following the flow of a fringed prayer shawl in Indianola, Iowa: windy day wave of the tallit.

Yutaka Kitajima weathered one crisis after another in Joestu, Niigata Prefecture. Djurda Rozic’s 90-year-old neighbor in Ivanic-Grad contemplated what to do with his garden. Zdenka Mlinar wept in Zagreb. Blossoms warmed in Tsanka Shishkova’s garden in Bulgaria.

wrath of windstorm…
he stands by a felled apricot
in bloom

lying on the grass
a cutoff olive branch
wet wound

Isabella Kramer sighed and shrugged her shoulders in Nienhagen, Germany. Vandana Parashar wondered whether flowing hand-writing styles will ever return.

May wind
the up and downs
of an old love

springtide
the rise and fall
of cursive English

Masumi Orihara studied alone in London. Her third line refers to “The Stranger,” a 1942 novel by French author Albert Camus.

Gatalica was grounded. Eric Kimura dedicated a haiku for “some friends who had been stranded in Hawaii because of COVID and were finally headed to Philadelphia.”

Spring is passing by
Season’s last blooms linger till,
Blown by summer winds

Warning to allergy sufferers--
I’m waiting
for the rain

Helga Stania rejoiced in Ettiswil, Switzerland: May rain--plants turn into signs into sound.

The (y)early coming
of rainy season--
yet doors closed 8 p.m.

Japan occasionally suffers from drought in years when the rain front moves south rather than over the archipelago. This rain verse by Lorraine A. Padden was honorably mentioned in the 2020 Kiyoshi and Kiyoko Tokutomi Haiku Contest.

dust-covered raindrops
drought becomes its opposite
just for this moment

Djurdja Vukelic Rozic sat with her aunt on a terrace near Dubrovnik “facing the restless sea, and countless white clouds.”

scent of freesias…
with a palm tree the wind
draws clouds

Kitajima is haunted by the final moments of radio warning broadcast from a building hit by a 20-meter wave from the Bay of Shitsukawa in Miyagi Prefecture on March 11, 2011.

this gale
all through the night--
his tender goodbye

almost naked
with only our feet wet
springtide

crackling paper
…fish and chips
from the take-away

Salil Chaturvedi was surprised by a strong sea wind off Goa, India. Suresh Babu and his fellow crew blew smoke rings in a calm spring wind off the Arabian Sea.

spring gust
the dog in the street
lifts his nose

spring prize catch...
the smoke rings
of a shared beedi

gale passed--
in a puddle, clouds
gliding away

Angela Giordano was amazed by a long field of color: in the warm wind, the wildflowers bloom all together.

dry garden--
nothing but thumbs;
colorless

strong spring wind--
the colours in the painting
fading away

Eva Limbach worries for a line of long-stemmed big, fluffy, fragrant garden sentinels: but for the wind white peonies.

Laugh in the rain at http://www.asahi.com/ajw/special/haiku/. The next issue of the Asahi Haikuist Network appears June 18. Readers are invited to send haiku about lightning on a postcard to David McMurray at the International University of Kagoshima, Sakanoue 8-34-1, Kagoshima, 891-0197, Japan, or e-mail to mcmurray@fka.att.ne.jp.