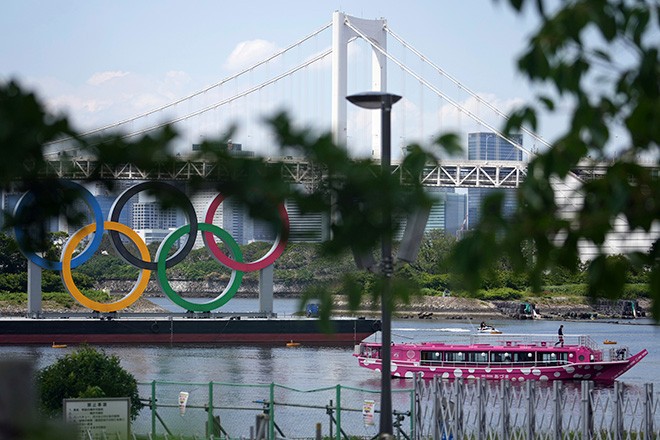 The Olympic rings floating in the water is seen near a construction site for Odaiba Marine Park, the venue for Tokyo 2020 Olympic Games Triathlon, Monday, May 31, 2021, in Tokyo. (AP Photo)

Government and Olympic-related officials are considering tougher anti-virus measures for the upcoming Tokyo Games, including requiring spectators to show negative COVID-19 test certificates at the time of admission, if they are allowed to attend the events.

The plan would obligate spectators to undergo PCR tests in advance and show the certificates obtained within one week of entry to an Olympic venue.

People who received vaccine shots will be exempted from the requirement, but they will need to show their vaccination certificates instead, according to the officials.

However, some government officials and experts raised doubts about the achievability of implementing such a large-scale precautionary measure at this late date in addition to a possible public backlash.

“There have not been official negative certificates issued (in Japan),” said an official handling the Olympic and Paralympic Games. “For instance, any document issued by hospitals where spectators are tested will be acceptable? How can you confirm them as authentic? It can cause many problems.”

The government and the Tokyo Olympics organizing committee have already decided not to accept overseas spectators. All spectators will be prohibited from eating and drinking alcohol at the venues as well.

The government and organizers are planning to decide whether the Games will be held with spectators in June as they monitor the infection trends and analyze the outlook for the state of emergency, which is currently in effect for Tokyo and nine prefectures.

A government official said that Prime Minister Yoshihide Suga and his administration “are leaning toward hosting the Olympics with spectators.”

If the government decides to hold it with spectators, it wants to improve the effectiveness of anti-virus measures by requiring the COVID-19 negative test certificates.

When Suga was questioned at a May 28 news conference about the risk of the Olympics spreading infections further, he showed willingness to hold them with spectators, citing professional baseball games as an example that have fans in the stands.

“It is true that they are being held with spectators as measures to prevent the virus from spreading are in place. We can make a similar response,” Suga said.

(This article was written by Masahiro Iwao and Akiyoshi Abe.)