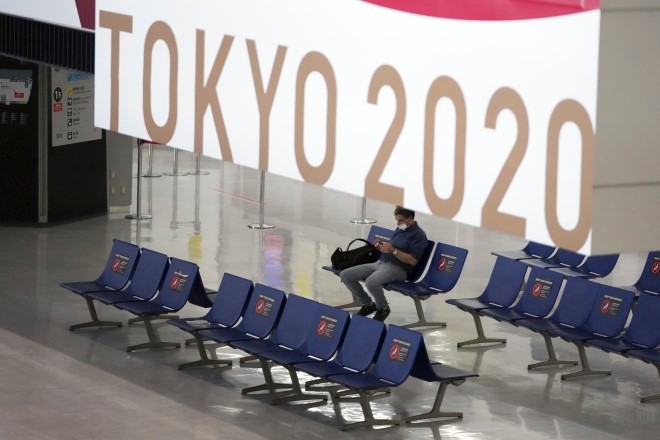 A man wearing a protective mask to help curb the spread of the coronavirus pauses near a banner of Tokyo 2020 Olympic at Narita International Airport on June 1. (AP Photo)

The vaccination of healthy athletes comes as only 2-3 percent of the general population in Japan has been fully vaccinated. Japanese Olympic Committee officials said about 200 athletes were vaccinated at a training center on the first day of the rollout.

Japanese Olympic Committee officials did not name any of the athletes. They also restricted coverage of the event, possibly fearing a public backlash.

Japanese Olympic Committee official Mitsugi Ogata said the vaccination of young athletes would not affect distribution to the general population, including the elderly and medical workers.

“Vaccination operations for athletes are conducted in a different organization from those for the nation,” Ogata said.

The Tokyo Olympics are to open on July 23. The International Olympic Committee has said being vaccinated is not required for participating in the Olympics. However, the IOC has encouraged all athletes to be vaccinated.

IOC President Thomas Bach has said he believes more than 80 percent of the residents of the Olympic Village in Tokyo will be vaccinated.

More than 15,000 Olympic and Paralympic athletes from more than 200 nations and territories are expected to enter Japan, in addition to tens of thousands of judges, officials, media and broadcasters.

Many medical officials in Japan oppose holding the Olympics, seeing it as a potential super-spreader event. The IOC says it will be “safe and secure” and always references guidance from the World Health Organization.