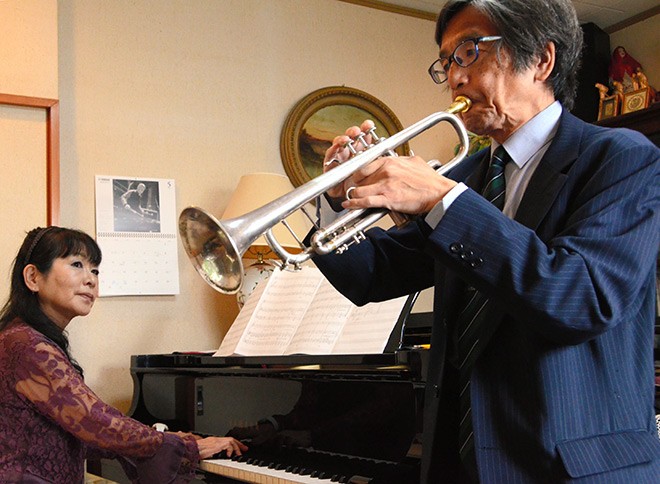 Chiharu Iino plays his trumpet, with Mayumi Tominaga on the piano, to cheer up people in Myanmar in Fukuoka on May 13. (Takuya Miyano)

FUKUOKA--Trumpeter Chiharu Iino has issued a clarion call here to pro-democracy activists in Hong Kong and Myanmar to stay strong in musical performances he posted on YouTube.

“Freedom of speech is a foundation of development in any world,” said Iino, 63, who lives in the city of Fukuoka, in one of the videos.

“Music is a common language of the world and a symbol of peace,” he added.

Before playing “Glory to Hong Kong,” which is sung by many protesters, Iino said, “There is no better joy than this if this performance gives power to Hong Kong people in different circumstances and people who are suffering.”

At the end of the song, Iino thrust his right arm into the air and said, “Glory to Hong Kong!”

After it was spotlighted by internet media in Hong Kong, Iino received messages from people in Hong Kong thanking him for his support.

Iino has also posted a video in which he plays a song sung by protesters fighting the military coup in Myanmar.

Iino used to work for Hitachi Ltd. when he was in his 20s. He lived in Hong Kong where he worked for a year in the 1980s.

That was before Britain’s handover of Hong Kong to China in 1997, and Iino said he enjoyed the free-spirited atmosphere there.

But the suppression of pro-democracy demonstrators in Hong Kong in recent years has saddened him.

Since the new national security law was implemented in Hong Kong in 2020, the local government has criticized the “Glory” song for its “strong political message.” The song has rarely been sung by people since then.

After activist Agnes Chow was jailed in December 2020, Iino came up with the idea to post a musical performance on YouTube.

“Music is essential and has power. I want the Hong Kong that I love and is bustling to come back,” he said.

It was difficult for Iino to find a pianist to accompany him.

About 10 pianists declined his request, as some cited the political nature of the performance.

But Mayumi Tominaga, 64, who has known Iino for a long time, agreed to accompany him because she said she was also concerned about the situation in Hong Kong.

They made a four-minute video in January and posted it on YouTube.

Then in February, Myanmar’s military staged a coup and took over the government.

Iino said he wanted to encourage pro-democracy activists in Myanmar with music.

He learned three songs that are sung by demonstrators from a dentist who has done volunteer work in Myanmar.

He made a video playing the three songs in mid-May and posted it on May 23.

“Some people may think it unthinkable that playing music can be prohibited, although it may not just be someone else’s problem but Japan's as well,” Iino said.

He noted that people who express their opinions are increasingly being alienated in Japan.

Iino hopes “peaceful days return to (Hong Kong and Myanmar) soon,” so that he can “visit there and play someday.”