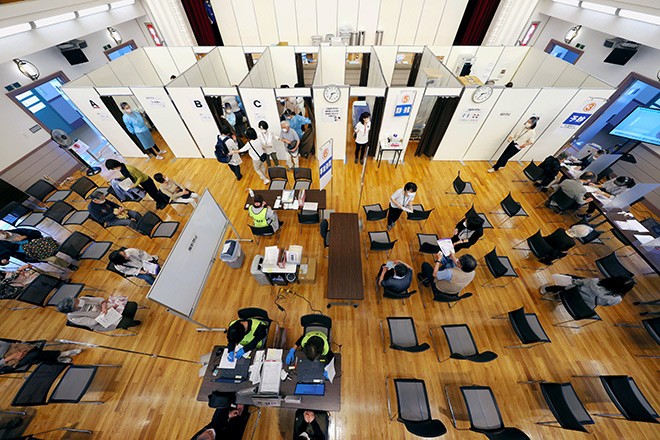 The government is opening a third avenue for COVID-19 vaccinations—companies and universities—to accelerate and expand coverage against the novel coronavirus.

Chief Cabinet Secretary Katsunobu Kato said at his June 1 news conference that companies and universities can start giving shots to employees and students and faculty on June 21 using the recently approved vaccine developed by Moderna Inc. of the United States.

The vaccine developed jointly by U.S. pharmaceutical company Pfizer Inc. and German biocommerce company BioNTech has been used for senior citizens, but as of May 31 only about 14 percent of that age group had received even a single dose.

Japan’s vaccine program started in February for health care workers. Inoculations have been conducted at medical facilities and government-designated venues.

Vaccinations in the third avenue will be managed by the companies and universities themselves.

Although major companies with clinics or medical personnel regularly stationed on their premises could start giving the jabs from June 21, smaller businesses may have to find other means to inoculate their employees. One option may be to have local chambers of commerce organize joint vaccination programs for small businesses.

Kato indicated that each company can decide if family members of employees as well as those working for subcontracted companies will be included.

A number of companies whose employees are in regular contact with the general public, such as airlines and railway operators, have indicated they were preparing to begin vaccinations on June 21.

Kato said that those seeking jabs at companies and universities can do so even if they have not yet received vaccination tickets from their local governments.

The government has signed a contract with Moderna to obtain enough vaccines for 25 million people.

The government has also set a goal of giving all senior citizens the required two shots by the end of July. The new program will mean that vaccinations will also be provided to much younger age groups.

Kato also said local governments can begin inoculating other residents once they determine that the goal of vaccinating their senior citizens is in reach. Local governments are being asked to prepare vaccination tickets for mailing to the general population from mid-June.

Masakazu Tokura, the new chairman of the powerful Keidanren (Japan Business Federation), said at a June 1 news conference that his organization would cooperate fully with the government plan for vaccinations at companies.

Although it is unclear how many companies can begin to administer the shots on June 21, a high-ranking official of the ruling Liberal Democratic Party said that spreading the availability of vaccinations would help in holding the Tokyo Olympics about a month later.

Takashi Nakano, a pediatrics professor at Kawasaki Medical School who is also knowledgeable about vaccines, said inoculations at the workplace would help protect other people.

Those receiving the jabs not only have a comparatively low risk of developing serious symptoms, but they are also in the age group at high risk of infecting others because their work may take them to various locations outside the company, he said.

Nakano added that steps would be needed to deal with possible side effects after inoculating employees.

(This article was compiled from reports by Naoki Kikuchi, Junya Sakamoto, Daisuke Hirabayashi and Kenta Noguchi.)