Ishigaki island in Okinawa, hit hard by virus, under emergency 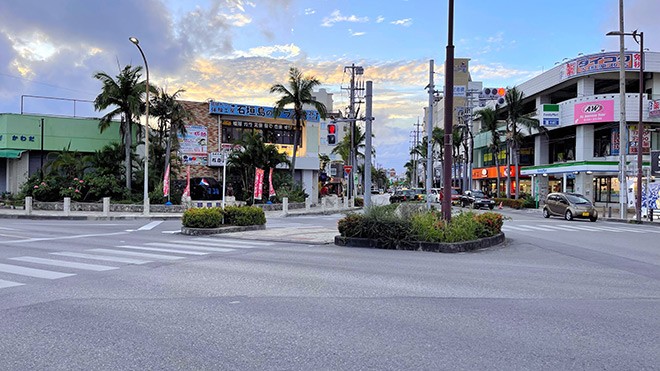 An empty street in Ishigaki, Okinawa Prefecture, on June 1 (Provided by a resident)

This popular tourist destination here on a remote southern island is reeling under a surge of novel coronavirus infections, forcing local officials to declare their own state of emergency.

The spike prompted city officials to issue the emergency declaration on May 31, urging residents to stay home even if they have no symptoms.

All schools have been shut down. Hotels have received cancellation requests.

At the Okinawa Prefectural Yaeyama Hospital, 37 of 41 beds set aside exclusively for COVID-19 patients have been occupied. Three of the patients have developed severe symptoms.

The city’s state of emergency, which urges residents to stay home from June 1 to 15, is strictly voluntary and not enforceable under a law or an ordinance.

Businesses in the city are also asked to reduce the number of employees working in offices and to implement thorough measures to prevent infections from spreading.

Both prefectural and city education boards decided to close schools from June 2 to 13.

About 5,000 students who attend city-run elementary and junior high schools, as well as 1,400 or so who attend prefectural schools, have been urged to refrain from going out.

According to the city’s education board, students at the affected elementary and junior high schools have obtained study materials online. Those who do not have an internet connection at home have received paper versions.

The prefectural education board on June 1 notified prefectural high schools and others to support online learning for students.

Junichi Ebinuma, 42, who runs a cafe in Ishigaki, on June 1 asked customers to sit side by side to prevent infections and shortened business hours.

The number of customers that day was less than usual but several tourists came by, he said.

Ebinuma decided not to serve alcohol. After 8 p.m., the cafe only accepts to-go and delivery orders.

“As a business, it is difficult. But I think it will be effective in (preventing infections from spreading),” he said.

Citing the fact that several people around him have tested positive for the virus, Ebinuma showed understanding for the declaration of a state of emergency.

To anyone inquiring about a room reservations at the guest house, the woman would reply, “You would not be admitted to a hospital now because the hospitals are full.”

The city’s issuance of its own state of emergency “came too little too late,” she lamented.

The Okinawa leg of the Tokyo Olympic torch relay passed through Ishigaki before the Golden Week national holidays in early May.

She said authorities “should have tightened border controls before the long holidays.”

“It is hard to see negative news on the internet and on TV. Small accommodations (like mine) will not survive if this continues,” she said.

(This article was written by Maho Fukui and Takuya Miyano.)