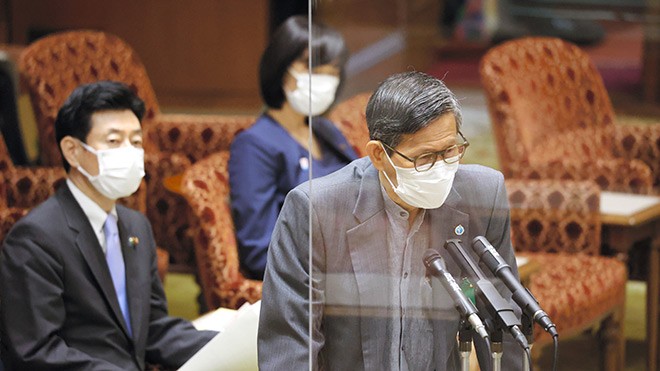 Shigeru Omi, the head of a government expert panel, responds to questions about the coronavirus pandemic at the Lower House Committee of Health, Labor and Welfare on June 1. (Koichi Ueda)

Out of fears about further spreading the coronavirus, the head of a government pandemic-response panel is urging that the scale of the Tokyo Olympics be kept to a minimum with strict safety measures in place if Japan pushes ahead with holding the Games.

Shigeru Omi said at the Lower House Committee of Health, Labor and Welfare on June 2 that staging the Summer Games amid a major health crisis would be ruled out under normal circumstances.

“But if organizers were to hold the Olympics (amid the pandemic), it would be their responsibility to minimize the scope of the event and strengthen health management,” he said.

Omi, an expert on contagious diseases, was pressing for an Olympics with no spectators, or at least a minimal number of spectators, to prevent many people from coming into close contact.

The Summer Olympics are scheduled to open on July 23.

He also said the public “will be less likely to cooperate with efforts to host the Games, as it is unclear why organizers are bothering to hold the event despite the public health crisis.”

Omi indicated he and other panel members would share their concerns about the risks of the Olympics turning into a super-spreader event with the International Olympic Committee and Tokyo Olympic organizing committee but not with the central government. He said that is because the government alone cannot decide on the fate of the event.

Omi has taken the position that it is not the job of health experts to decide whether the Summer Games should be held. But he has said many experts believe they have the responsibility to provide advice on how to lower the risks of infection and point out any areas where risks are high.