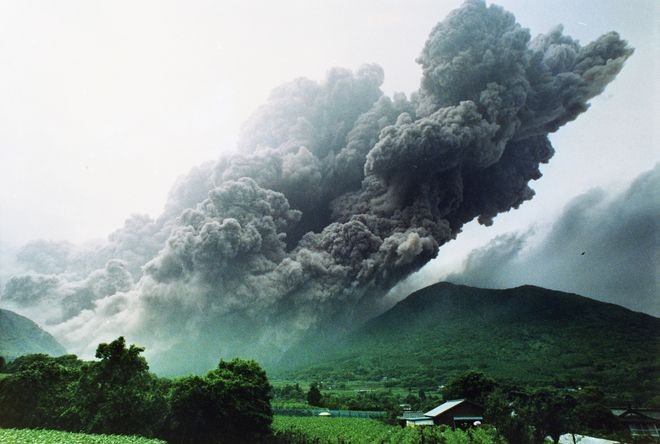 Eruptions of pyroclastic flow rise at nearby Fugendake, the peak of Mount Unzen, on June 3, 1991. (Asahi Shimbun file photo)

Kanichi Kanegae was the mayor of Shimabara in Nagasaki Prefecture while volcanic eruptions continued at nearby Fugendake, the main peak of Mount Unzen, in 1991.

Readily recognizable for his long white beard, he vowed not to shave it off until his prayer for the eruptions to end was answered.

Kanegae swore that oath when an eruption triggered a deadly pyroclastic flow on June 3, 1991, he noted in his book "Fugen, Nariyamazu" (Fugen won't stop rumbling).

Among the victims were 12 firefighters, and Kanegae delivered this funeral address: "You who put yourselves on the line to protect the lives and assets of people ... why did you have to die?"

Of the 43 dead, 16 were news media personnel and four were taxi drivers who'd been hired by them.

The firefighters perished while warning reporters off.

As a reporter myself, I am painfully familiar with the urge to get as close to the scene of action as possible. But that got other people killed in the process, and I cannot find a word to say.

Thirty years have elapsed. But precisely because even this terrible tragedy will continue to recede into the past, we must renew our resolve to not let it fade into oblivion.

We must never forget that volcanoes in our country can turn lethal at times. Every effort must be made to prevent the recurrence of similar disasters.

In his book, Kanegae recalled that the media's massive coverage of the eruptions generated nationwide empathy for the victims and survivors, and got the government to provide support.

But he minced no words in criticizing reporters for refusing to heed evacuation orders. He also noted, "Between volcanologists and members of the media, there was a gap in the perception of danger."

Reporters are duty-bound to fulfill their professional responsibility, but must also stay away from grave danger. They must strive for this balance in every situation.

That goal, however, is still only half accomplished.