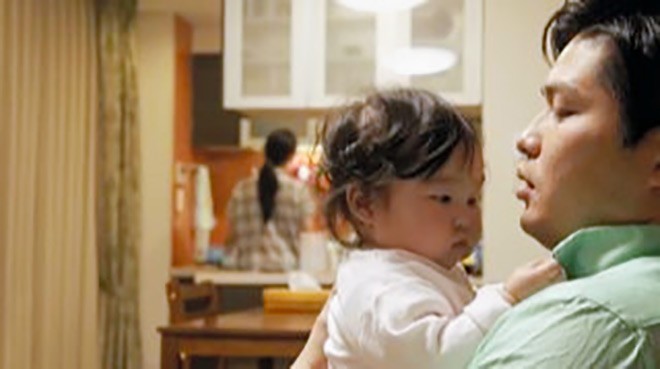 A video on YouTube that encourages fathers as well as mothers to take child care leave. (Captured from the video footage)

A revised child care law was passed in the Diet on June 3 to oblige businesses to encourage new dads to take parental leave as fewer than 10 percent of them have been utilizing the parental leave system.

Under the existing law, both men and women are allowed to take paid child care leave from their work until their child turns 1 year old, in principle.

A lack of understanding over the significance of men taking child care leave and the difficulty they feel about gaining support from their superiors have been cited as major reasons behind the reluctance of new fathers.

The revised law is intended to make it easier for male workers by requiring employers to give new fathers a supportive push to take the leave.

Under the new law, efforts by companies such as merely putting up posters promoting child care leave inside the office will be deemed insufficient.

Starting from April 2022, employers will need to personally encourage workers whose wives are expecting the birth of a child to take the time off.

If the employers fail to do so, labor authorities will issue a warning or directive of guidance against them.

In extreme cases of noncompliance, the names of companies that don't follow the rules may be disclosed.

The new law also requires businesses with a workforce of more than 1,000 employees to publish the ratio of male workers who took paternity leave, starting from April 2023.

Companies are also expected to lay out a personnel policy that factors in the possibility of male workers taking parental care leave.

The new law also sets up a system starting around October 2022 that permits men to take a leave of up to four weeks within eight weeks after birth, separately from regular child care leave.

The new arrangement is designed to prod husbands to help raise their children with their wives during the period immediately after childbirth, when women are experiencing the highest physical burden.

Men can divide the four weeks into two parts and also engage in certain work during the leave if they wish after reaching a labor-management agreement about it.

Under the current system, men can take a second child care leave only when they took their first within eight weeks after the birth of the child.

But starting from autumn 2022, both men and women will be eligible to take two child care leaves over a year until their child turns 1.

That means that fathers can take up to four leaves, including the two taken within eight weeks after their child’s birth.

Under the new law, contract or part-time workers will also be able to take child care leave even if they have been working for their current employers for less than a year.

The existing law requires workers to be employed at their job for more than a year before they become eligible for parental leave.

One of the companies that has implemented a system to encourage paternity leave is Marui Group Co., a leading retailer with about 5,000 employees.

All 45 of its male employees who had a child in fiscal 2020 took a leave, the third straight year for the Toky-based company to have a 100 percent rate for new dads taking parental leave.

Marui Group began its efforts to encourage men to take a paternal leave around 2014, when the ratio of men taking it was 14 percent.

But more than 50 percent did so the next year.

“It is now taken for granted that men also take child care leave,” said an official at the company’s human resources department.

A male employee who took half a year off from work to raise his newborn in fiscal 2018 said he could do so “without reservation.”

The employee, 45, said his boss nudged him to do so although he initially worried about burdening his colleagues and hurting his chances of promotion if he took the time off.

A fiscal 2018 survey by Mitsubishi UFJ Research and Consulting showed that more than 20 percent of male respondents cited a corporate culture discouraging paternal leave as a reason for shying away from it.

One small Niigata-based company is far ahead of large companies in taking steps to support child care leave for men.

Hakushindo Co., which produces school albums, has a workforce of about 150 employees. Six male staffers took child care leave when their children were born between autumn 2015 and autumn 2019.

Whenever an employee has notified the company that they are expecting a child, the company's human resources staff then sends an email to the person saying, “You should take child care leave. We will support you,” which is also sent to the employee's boss.

(This article was compiled from reports by Sawa Okaybayashi and Noboru Inoue.)