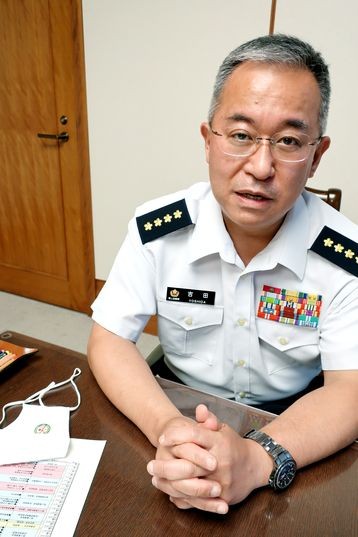 Yoshihide Yoshida, the new chief of staff of the Ground Self-Defense Force, at the Defense Ministry on May 18 (Photo by Yoshiyuki Komurata)

Japan's new head of the Ground Self-Defense Force is something of a maverick, having become the first top-ranking officer not to have graduated from the National Defense Academy in recent memory.

As chief of staff of the GSDF, Gen. Yoshihide Yoshida, 58, is a firm believer in rigorous training that leaves Japanese forces ready to confront any emergency without, as he puts it, having to unsheathe their weapons.

In his view, military personnel need to keep their weapons in perfect condition so they never have to be used.

“Taking swords out means the operation has already half-failed,” he says.

Raised in a Tokyo household where his father worked for a company, Yoshida did not seem cut out for a military career.

Known for his affable and gentle looks, he also has a stubborn nature and rarely is willing to change his mind.

As his family relocated frequently due to his father's job transfers, Yoshida made new friends in each location.

When he entered the University of Tokyo to pursue his major, urban engineering, Yoshida quickly found the subject matter dull. It was then that he encountered a book that covered all aspects of national security strategy.

Astonished to discover that “such a world exists,” he decided not to look for job opportunities at government agencies or large private corporations like most of the other students and set his sights on joining the GSDF.

Almost all of the top brass in the SDF are graduates of the National Defense Academy. Yoshida, the first officer to break the mold in 30 years or so, yearned to develop strategies based on expertise from front-line servicemen.

When he was a platoon commander in a unit in Hokkaido, where he was first deployed, Yoshida collapsed from fatigue during a winter training session using skis and had to be rescued by lower-ranking officers.

Dispirited by that experience, Yoshida returned to his unit only to be told by an experienced veteran “not to worry about it” and “just do your best.”

It made him realize he was “being nurtured” by his fellow servicemen.

Working as a commander in a range of areas from northern to southern Japan, Yoshida was also seconded to the Foreign Ministry and the Cabinet Secretariat’s National Security Secretariat.

He sees his mission this way: to play a core role in national security in the hope Japan will never again be involved in warfare.