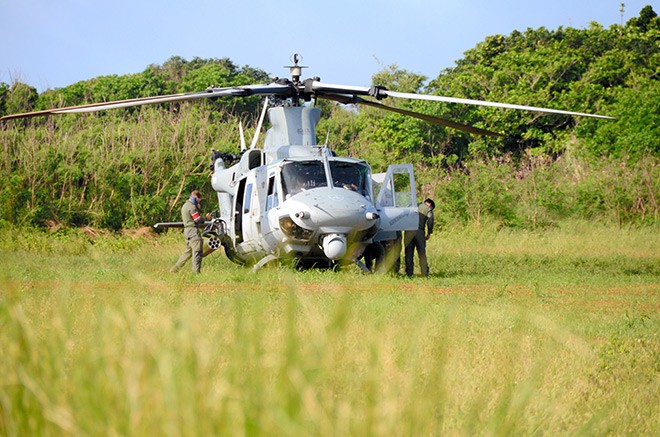 Military personnel, believed to be associated with the U.S. military, on June 3 check the helicopter that made an emergency landing in a farm field on Tsukenjima island in Uruma, Okinawa Prefecture. (Daizo Teramoto)

Around 11 p.m., a Tsukenjima islander in Uruma, Okinawa Prefecture, reported to the police that “the U.S. military helicopter had made an emergency landing at a field around the central part of the island.”

Another islander, a woman in her 70s, said a loud noise woke her up around that time.

“The huge flight noise was quite different from the usual ones, and I was scared,” she said.

As of the morning of June 3, there were no reports of injuries or damage to the homes.

According to the prefectural police, the aircraft involved was the U.S. military’s multipurpose UH1 helicopter.

All five flight crew members were U.S. Marines from Futenma Air Station in Ginowan city in the prefecture.

After the accident was reported, the government summoned a crisis team to respond to U.S. military accidents on the early morning of June 3. The team is led by the Cabinet Secretariat’s Okinawa crisis management officer. The members were dispatched to Okinawa Prefecture and are collecting information.

“It should have never happened,” Kiichiro Jahana, the vice governor of Okinawa Prefecture, told reporters on June 3. “(The accident) gave huge anxiety to Okinawan people.”

According to the police, the helicopter made an emergency landing in a farm field, about 120 meters from a residence.

Crew members explained that they were forced to make the landing during nighttime training due to an engine malfunction. The helicopter suffered no apparent damage.

Chief Cabinet Secretary Katsunobu Kato said at a news conference on June 3 that the helicopter landed there after the crew spotted a warning light during the flight. He said that the government asked the U.S. military to swiftly provide information on the cause of the malfunction and to try its best for safety management.

Tsukenjima island is located in Uruma city at the middle part of Okinawa’s main island. The remote island, which has about 400 residents, is situated about 30 minutes by ship from the Katsuren Peninsula.